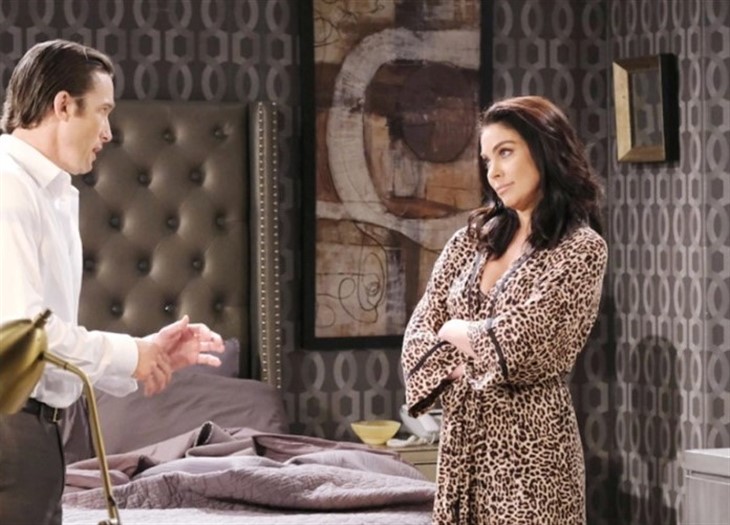 Days of Our Lives spoilers tease that Philip KIriakis (Jay Kenneth Johnson) and Chloe Lane (Nadia Bjorlin) will get into a confrontation when he accuses her of chasing after Brady Black (Eric Martsolf) in an upcoming episode of Days of Our Lives!

Longtime Days of Our Lives viewers will remember that Brady and Philip have been romantic rivals over Chloe literally for years; since high school! Chloe was the geeky ghoul girl back in high school, the ugly duckling that all the cool high school boys in Salem passed over! DOOL spoilers show that Philip actually was dared to ask her for a date for a dance, and bet him that he wouldn’t.

But Philip took the dare, and romance blossomed between the two. Chloe started turning from an ugly duckling into a beautiful swan, after Philip and Brady’s sister, Belle Black (now Martha Madison) befriended her. But then Chloe met Belle’s brother, Brady Black (now Eric Martsolf) and she got a crush on him while still dating Philip! And that, Days of Our Lives viewers, is how the years-long romantic rivalry between Brady and Philip began!

Days of Our Lives viewers will recall that Brady has already confessed his love for Chloe rather recently, once he was through for good with Kristen DiMera (Stacy Haiduk) who went on the run! Kristen had kidnapped Kate DiMera (Lauren Koslow) and had been planning to ship her off to a Greek island in a dufflebag, and then actually collided with Brady on the road, injuring him! Days of Our Lives viewers know Kristen had abandoned the car, which was Kate’s and then Jan Spears (Heather Lindell) stole it with Chloe in the trunk, unbeknownst to Jan when she kidnapped Claire Brady (Isabel Durant). Chloe was also injured in the process. Brady recovered, Chloe was left with an arm in a cast and Brady confessed his love. But by that time, she’d decided to date Philip!

Days of Our Lives viewers know that Chloe may not be merely fickle, going back and forth from Philip to Brady like she did in high school. More than likely she is just helping by being a mother figure to Brady’s daughter Rachel Black (Finley Rose Slater). But because she dumped Philip for Brady back in high school, those hurtful memories might rise up to play havoc in Philip and a new crop of green eyed monsters of jealousy might spring up as a result!

Days of Our Lives spoilers and recaps show that Chloe married Brady a couple of times, although it broke up over his past drug and alcohol abuse but she and Philip never progressed to that point. Chloe was Philip’s first love and he has never really gotten over her, more than likely. He was married twice, once for a short time to Belle and another time to Melanie Jonas (Molly Burnett).

Chloe may not appreciate Philip’s accusations of her chasing after Brady when all she might be doing is continuing to help Brady with his and Kristen’s daughter.  DOOL spoilers hint that could cause some considerable friction in their relationship!