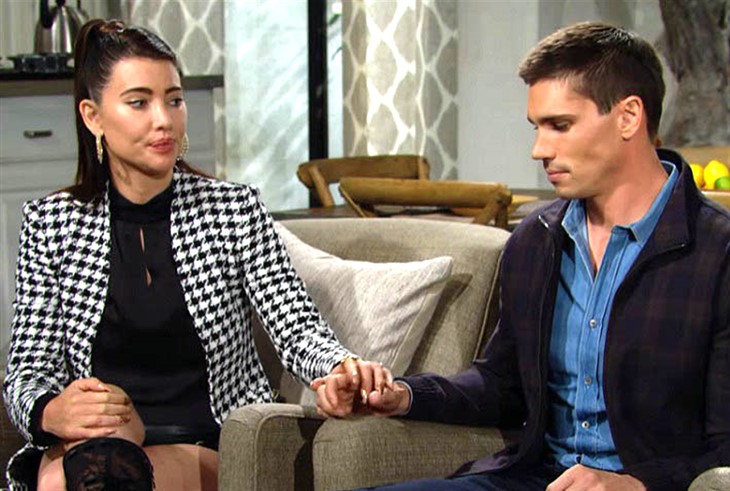 The Bold and the Beautiful spoilers document that Liam Spencer (Scott Clifton) could not handle Steffy Forrester Finnegan (Jacqueline MacInnes Wood). But John Finn Finnegan (Tanner Novlan) can because of his qualities and Steffy simply being a better personality match. The Sinn win ended years of Steam misery on B&B.

Hope Spencer (Annika Noelle) and Liam may remind viewers of teenagers who are in love. They are all over each other and clearly seem to be a better fit than Steam was.

Now, let us explore other couples as Christmas approaches and another year of B&B ends.

The Bold And The Beautiful Spoilers – Quinn Fuller Given Unbelievable Gift

Queric has a bizarre relationship. But there is no doubt that Quinn Fuller (Rena Sofer) and Eric Forrester (John McCook) care deeply for each other. Grudging kudos to this couple at Christmas, as Quinn was given the unbelievable gift of remaining married to Eric.

As to each person’s future, it would be unfortunate if the writing staff shelves Queric until the spring or summer, as was true of the months-long Batie absence.

Eric seems determined to stay with Quinn based on his perception of mortality. He appears to believe that energy is lacking at this stage of his life. So, he has basically settled for Quinn.

The above does not match Eric’s fighter’s spirit. Hopefully, the holidays generate a change in perspective.

Katie Logan (Heather Tom) is inclined to begin dating Carter Walton (Lawrence Saint-Victor), who is a kind soul. Bill Spencer (Don Diamont) would not be tagged as kindly by anyone.

However, Bill does love Katie, and she knows it. Plus, he is her only child’s father.

Reviving Batie would present another risk for Katie. Bill has been open about not being able to change who he is. But his extended absence from her has apparently not been coupled with another romantic replacement. That should matter.

Katie should choose a path and pursue it. Bill, Carter, or float safely through the single life.

The Bold And The Beautiful Spoilers – Other Couples Matter Too

Wyatt Spencer (Darin Brooks) needs to answer a pointed question. Do you know how great Flo Logan (Katrina Bowden) is?

It is past time to marry Flo and have children. If not during Christmas, then make it your New Year’s resolution, man.

Paris Buckingham (Diamond White) is primed to become engaged to Zende Forrester Dominguez (Delon de Metz). This couple needs to marry, as they are a good match.

Bridge was and remains the endless roller coaster. If Brooke Logan Forrester (Katherine Kelly Lang) and Ridge Forrester (Thorsten Kaye) split in the next few weeks or months, they will eventually reconcile. Right?