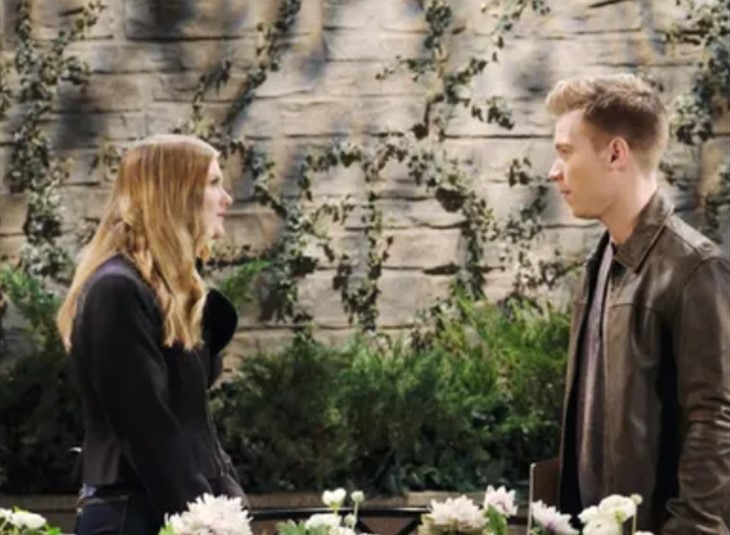 Days of Our Lives (DOOL) spoilers for next week of February 22 reveal that Allie Horton (Lindsay Arnold) is going to have a hard time with Henry Horton (Jayna and Kinsley Fox). It is stated that Tripp Dalton (Lucas Adams) steps in to help his nephew. However, this could actually bring Tripp and Allie closer. It seems like there is a possibility that Tripp will be a father figure to Henry.

DOOL spoilers reveal that Allie was so convinced that Tripp was the man who raped her. She became even more convinced — and convinced the rest of Salem — when the paternity test showed Tripp and Henry had similar DNA. Now she knows that it was Charlie Dale (Mike Manning) who raped her, who also happens to be Tripp’s half-brother. Despite being accused of a serious crime, Tripp will be forgiving.

It is confirmed that during the week of February 22 on Days of Our Lives, Allie will have some problems with Henry. He is an infant and we haven’t seen him lately due to COVID-19 restrictions. So, we aren’t sure if he’s still a few months old or if he has been rapidly aged to a toddler. However, Allie will struggle and won’t know how to deal with her son. This could be colic, teething, or even coloring on the walls if he’s aged up.

Days Of Our Lives Updates & Spoilers – Tripp Dalton Steps In

Days of Our Lives spoilers reveal that Tripp will help Allie with Henry next week. Now, we understand that Tripp is Henry’s uncle. However, he has not really shown any interest in the child until now. There was some speculation that Tripp and Allie could have a romance. In fact, Tripp always talked about how he really liked Allie when he met her in London. He wanted to get to know her better. So, that seemed to foreshadow a romance despite Allie later accusing him of rape.

Days Of Our Lives (DOOL) Spoilers: John And Marlena's Food Poisoning – Is It Something More?https://t.co/jrc8pZ8kWJ

It is suggested that when Tripp helps Allie with Henry, he will bond with the child. It might be more of a “surrogate father” connection than just an uncle/nephew relationship. When this happens, Tripp and Allie could also really get to know one another. However, fans are divided on this possibility. Some don’t think it’s right that a girl would develop a romance with the man she previously thought raped her… even if he turned out to be innocent.

So, we will have to see if these two just become good friends or something more on NBC Days. What would you like to see happen with Tripp and Allie? Should they become a couple or would you like to just see Tripp be involved as an uncle?

Be sure to catch up on everything happening with DOOL right now. Come back here often for Days of Our Lives spoilers next week, DOOL cast news, and soap opera updates.