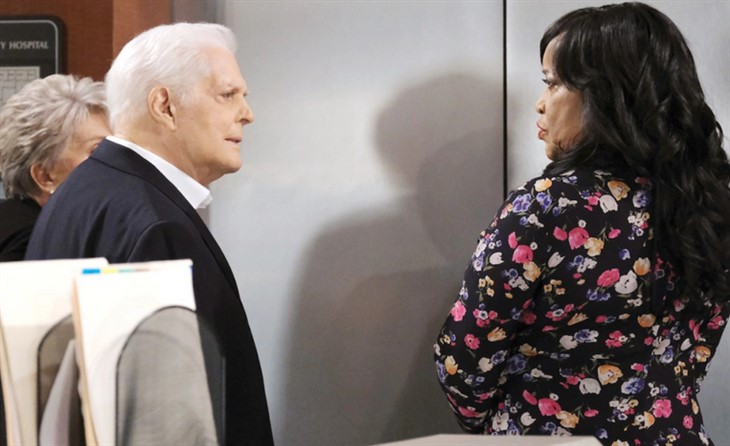 Days of Our Lives spoilers for the week of October 25 reveal that Julie Williams (Susan Seaforth Hayes) will still be banned from visiting Doug Williams (Bill Hayes). Meanwhile, Paulina Price (Jackée Harry) doesn’t know if Abe Carver (James Reynolds) can be revived. Together, they bond and pray for two miracles.

Doug was sent to Bayview and ever since his transfer, has been banned from visitors, including Julie. The only people Marlena is allowing to even talk to Doug are the medical staff.

Doug won’t be the only Salemite with a health crisis. Carmine (Richard Stevens) has come to Salem to kill Jake DiMera (Brandon Barash). However, Jake isn’t the one that ends up being rushed to the hospital. Abe gets caught in the crossfire and is hit by a bullet. Jake races to help the mayor until help arrives. Rafe Hernandez (Galen Gering) brings Jake down to the police station for questioning.

Meanwhile, Kayla is treating Abe’s injuries when he suddenly flatlines. It is confirmed that viewers will see Abe die and walk into the light.

Days Of Our Lives Spoilers – Paulina Price Bonds Amid Crisis

Days of Our Lives spoilers reveal that Paulina will be devastated and prays that Abe survives. Paulina is also keeping a huge secret from Abe and Lani Price Grant (Sal Stowers). When Paulina faces the possibility that Abe might not wake up, she will probably promise to tell him the whole truth if he just comes back to her.

At some point, Paulina and Julie will come together at the hospital. The two women will provide each other with comfort. Since both characters are women of faith, they will also pray for Doug and Abe’s recoveries.

Even though Abe flatlines and walks into the light, there is reason to believe the mayor will come back. The devil is in Salem and has repossessed Marlena. Satan also has a sinister plan for Ben Weston (Robert Scott Wilson) and Ciara Brady Weston’s (Victoria Konefal) future baby.

It’s possible that when Abe comes back from the other side, he will have an important message. Could that message be a warning about Satan’s sinister scheme? If so, will Abe be expected to save Marlena, baby “CIN” and the town of Salem? Or will he simply relay the message to someone else, such as John?