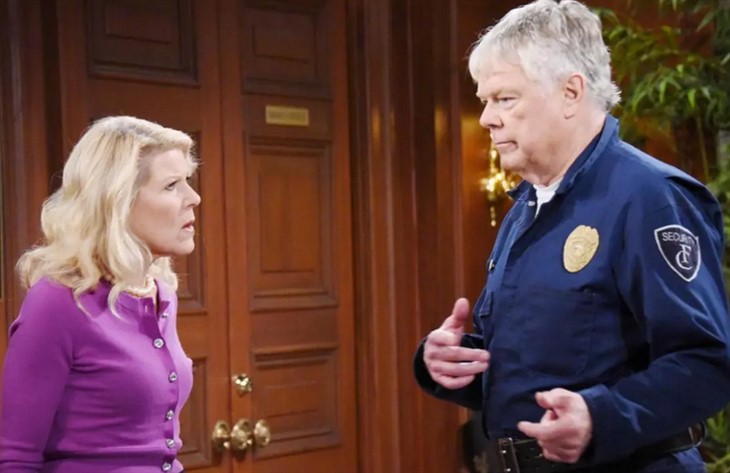 The Bold and The Beautiful (B&B) spoilers and updates reveals fan favorites Dick Christie and Alley Mills will soon be back in action at Forrester Creations. They have been missed, and their unique viewpoint on recent events will be hilarious.

The Bold And The Beautiful Spoilers – Alley Mills And Dick Christie

Alley Mills and Dick Christie have been missed on The Bold and the Beautiful. It’s more than her lemon bars and his uniform or their combined detective work. Viewers love these two and have been asking for more than a year to have them back in action. Pam was last scene flying solo at Steffy Forrester Finngan’s (Jacqueline Wood) wedding John Finnegan (Tanner Novlin). She was hiding underneath a lampshade hat and wearing a dress that looked liked draperies. Charlie was on-screen briefly once earlier in the year.

B&B Spoilers – Wedding Bells Could Finally Be In The Air

Pam and Charlie have been engaged longer than many marriages have lasted on The Bold and the Beautiful. If they stick around perhaps they will set a date. The duo will be on-screen Friday and also Monday. October 25. It’s not clear who they will interact with but fans know Pam has done battle with Quinn Forrester (Rena Sofer) and Charlie has been blackmailed by Sheila Carter (Kimberlin Brown).

Fans of B&B continually point out that the CBS soap puts popular characters on the back burner. Pam and Charlie are but two of them. Each time they show up their followers hope it will be for the long haul only to be disappointed time and time again. Viewers would love to see Pam’s reaction to Quinn, Eric, and Carter’s unusual arrangement and the look on Charlie’s face when he finds out Sheila is on the loose and teamed up with Deacon Sharp (Sean Kanan).

In addition to working on The Bold and the Beautiful, Dick Christie has been on many television series including Hunter, The Ropers Small Wonder, Knotts Landing, Who’s the Boss?, Days of Our Lives, Mama’s Family, Newhart, Hart to Hart, The Waltons, and Breaking Bad. Alley Mills is best known for The Wonder Years, and Dr. Quinn Medicine Woman. She also had roles in many other series including Newhart, Hillstreet Blues, Punky Brewster, Touched by an Angel, and The Waltons. She was also in the television mini-series The Atlanta Child Murders, and The Beach Boys An American Family.