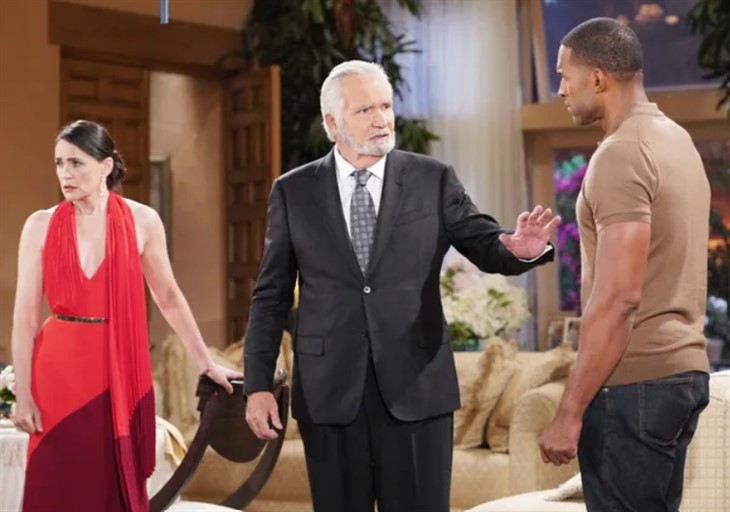 The Bold and the Beautiful spoilers reveal that Katie Logan (Heather Tom) will start making suspicious observations. As Katie and her sisters try to find out the truth, Eric Forrester (John McCook) covers for Quinn Forrester (Rena Sofer). However, just how long will Eric be able to hide his “approval” of Quinn and Carter Walton’s (Lawrence Saint-Victor) activities?

The Bold And The Beautiful Spoilers – ‘Quarter’ Give Into Passion

B&B spoilers reveal that during the week of September 20, Quinn and Carter will give into temptation. Even though Eric has given his approval of the two being together intimately, Quinn and Carter both believe this is a bad idea. “Quarter” do their best to avoid sleeping together under Eric’s agreement. However, they do end up not being able to resist each other.

A lot of people are questioning what is really going on with Eric and Quinn’s marriage. Nobody can really get answers. At some point, Quinn and Carter are going to be seen together and it’s going to raise concerns. Katie is one person that starts to get suspicious, so she must see or hear something.

All of the Logan sisters recently had a conversation about Eric and Quinn. Donna Logan (Jennifer Gareise) is still in love with her ex-husband. While she doesn’t think Quinn is right for Eric, she also won’t interfere. However, Brooke Logan Forrester (Katherine Kelly Lang) is an entirely different story. As time goes on and the Logan sisters start comparing notes and making observations, how much longer will the truth stay hidden?

The Bold And The Beautiful Spoilers – ‘Bridge’ Launch Investigation

The Bold and the Beautiful spoilers reveal that Ridge Forrester (Thorsten Kaye) and Brooke will do their own investigation. Ridge has tried to get Eric to open up, but isn’t getting any real answers. The vagueness might be exactly what prompts “Bridge” to enlist Justin Barber’s (Aaron D. Spears) services.

Even though it seems as if Eric was setting up Quinn, spoilers for the week of September 20 confirm that the patriarch covers for his wife. The only reason he would need to cover for her is if Quinn and Carter were together. That means the three of them will share this sordid little secret while everyone else is either concerned or full-on investigating.

When the truth comes out, how will Eric explain his approval and what will this do to Carter’s professional reputation? Is this going to be a long-term solution for Quinn or will this arrangement fall apart quicker than the trio expects? We will have to keep watching the CBS soap to find out what happens next with this storyline.