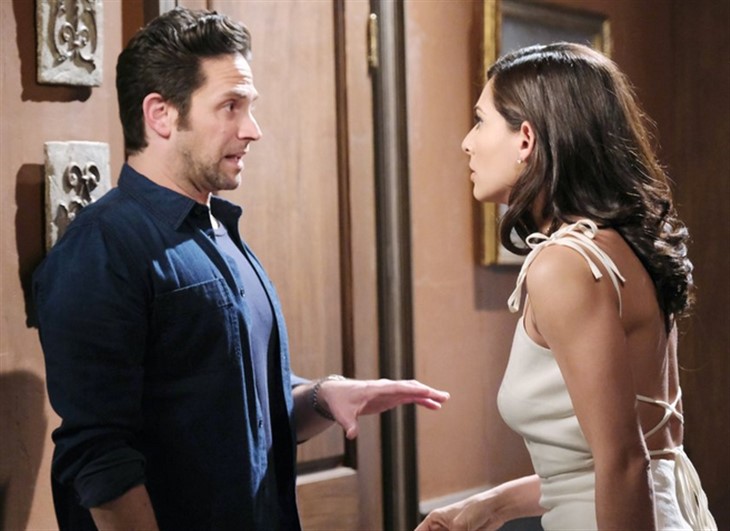 Days of Our Lives (DOOL) spoilers for Thursday, September 23, 2021, reveal in Salem Gabi and Jake not realizing how much trouble they are really in.

Days Of Our Lives Spoilers – Have Gabi And Jake Played Their Last Hand?

Gabi Hernandez (Camila Banus) and Jake DiMera (Brandon Barash) seem to have no friends in town. And, despite Gabi owning the DiMera mansion, she and her boyfriend had been playing house at Rafe’s (Galen Gering) place and may be about to overstay their welcome — with another houseguest, Ava Vitali (Tamara Braun).

Ava has just about had it with having to share her space with Gabi and Jake, and now she doesn’t. But she still decides to rat them out to Philip Kiriakis (Jay Kenneth Johnson). They are conspiring to get a hold of Titan and he didn’t even know it. Will this now make Philip revenge-minded?

Meanwhile, Philip may at least get his wish on the romantic front. He definitely wooed Chloe Lane (Nadia Bjorlin) on their picnic and now Chloe has a bone to pick with Brady Black (Eric Martsolf) and accuses him of plotting with Victor (John Aniston). She is on Philip’s side in all of this and is not pleased with Brady and Victor Kiriakis at all.

DOOL Spoilers – Are Gwen Rizczech And Xander Kiriakis Ready To Take The Next Step?

Gwen (Emily O’Brien) and Xander (Paul Telfer) sure did grow close when they were both living in the Horton house, but they grew even closer when Xander Kiriakis moved into the Salem Inn. That’s when they became friends with benefits but swore that was all they would be.

However, it’s quite clear that Gwen and Xander have feelings for one another as they keep covering for the other whenever one is about to be in trouble with Jack Deveraux (Matthew Ashford). They really do care about what Jack thinks of them, so that means they keep lying, as well. Jack can’t find out that they are unable to stop scheming. But can he find out about their relationship? And is that relationship ready to evolve to more than just friends with benefits? How will Jack even feel about all that? And what about Sarah, who is still out there somewhere…. Stay tuned to Days of Our Lives weekdays to see how these stories play out.