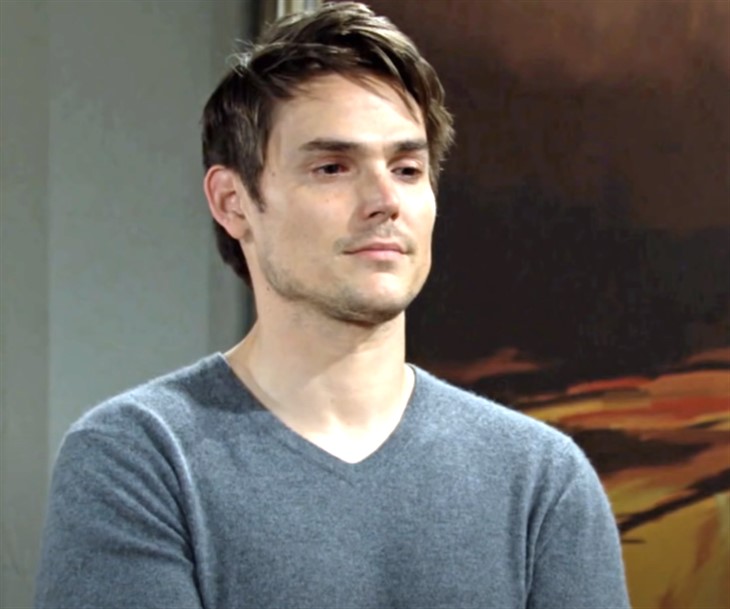 The Young and the Restless (Y&R) spoilers document that Adam Newman (Mark Grossman) is chomping hard on the bait Billy Abbott (Jason Thompson) is offering. A truly magnificent performance at Society resulted in actual injuries but was well worth the pain in Billy’s warped point of view.

Returning to one of his old haunts, Billy waited for Sally Spectra (Courtney Hope) to arrive in disguise. On cue, Thompson’s character and his gambling buddies, who appeared to be in on the game Billy is playing with Adam, became loud.

Billy’s cash-out was timed so that Sally could capture the moment on her smartphone, which is the modern method of reporting on your fellow, despised citizen.

The Young And The Restless Spoilers – Not Letting Go Of Past

Adam was admonished by the pretend drunk Billy. Grossman’s egging-on alter ego was told that he was responsible for all that had gone wrong.

A trained medical professional should be handling Billy’s inability to release his negative feelings for Adam. Instead, a real-time revenge play is offered during the Christmas season in Genoa City, Wisconsin.

Sally’s later arrival, like Adam’s happening into Society, felt a bit soapy. Billy and Lily Winters (Christel Khalil) could have waited at Abby Newman Abbott Chancellor’s (Melissa Ordway) hot spot setting all night or for days on end. But Adam arrived so that Billy could play the role as intended.

Y&R Spoilers – Billy Abbott Has Nothing Better To Do

Money is not an issue for someone who had a father who created a successful cosmetics business. Coupled with John Abbott’s (the late, great Jerry Douglas) residual means is Jill Abbott Atkinson’s (Jess Walton) place in the corporate world as the head of Chancellor Industries.

Some may dispute how Jill came to amass her fortune. But Walton’s character was recently praised by Victor Newman (Eric Braeden) as having a good business mind.

The Moustache offered that compliment regarding Jill’s decision to put Chanc Comm up for public bid rather than quickly sell it off. That is also a veiled shot at Billy, who screwed up his mother’s media platform by trying to expose Ashland Locke’s (Richard Burgi) identity.

The Young And The Restless Spoilers – What Is Lily Winters Thinking?

Lily knows better, yet she is going along with Billy’s plan. She seems to have fallen under the same spell that previously mesmerized Victoria Newman Locke (Amelia Heinle).

The plan to get Adam, Victor, and Ashland continues because Lily can not prevent Billy from seeing the danger he is creating. Jack Abbott (Peter Bergman) recently learned the truth. So, he could expose what is happening at any time.

Major consequences are likely if Billy is allowed to continue. Maybe Newman Media will take a public relations hit if it publishes what would be a false story about Billy’s apparent dissent.

But even if that happens, the wrath of those men will be fierce. Billy seems to not care about that collective reaction and proceeds with his reckless game.