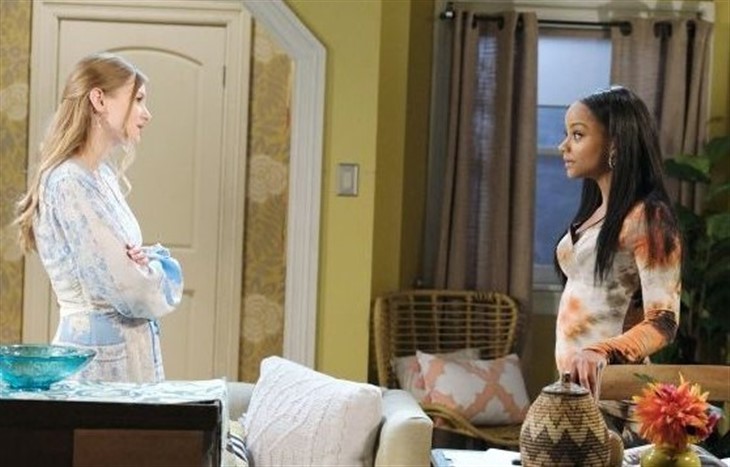 Days of Our Lives (DOOL) spoilers reveal that Johnny DiMera (Carson Boatman) will be romantically interested in Chanel Dupree (Raven Bowens). However, Allie Horton (Lindsay Arnold) might not approve. There is speculation that Allie could really show that she’s just like Sami DiMera (Alison Sweeney) as she tries to keep Johnny and Chanel apart.

DOOL spoilers reveal that Johnny arrives in Salem and happily reunites with his sister. Allie is overjoyed to see Johnny and the two will share a loving embrace. The siblings will likely spend some time catching up. He will learn all about Sweet Bits Bakery and meet Allie’s baby. Johnny will eventually also meet Allie’s friend and business partner, Chanel.

Even though Chanel has a broken heart right now, she will eventually move on. It is teased that Johnny will be intrigued by the new business owner and she could also be interested in him. However, the situation is complicated and we could see some issues if Johnny and Chanel become a couple.

Days of Our Lives spoilers reveal that Allie might not approve of Johnny and Chanel’s relationship. This could be a combination of reasons, including Allie’s lingering feelings for Chanel. She might know something about Johnny that makes her doubt he’s right for Chanel. Or perhaps it’s the way Chanel is that makes Allie want to protect her brother. It’s one thing to be friends and drinking buddies with Chanel. It’s quite another to want that person to be romantically linked to a sibling.

It has been teased for months by head writer Ron Carlivati that Allie really is Sami’s daughter. We haven’t seen too much of that since her return to Salem. There was the way she tried to go after Tripp Johnson (Lucas Adams) when he was thought to be her rapist. However, that was a different situation and she never did follow through with her plans for vengeance.

So, we really are waiting to see Allie be anything but a sweet, kind-hearted person. Plus, when Ben Weston (Robert Scott Wilson) said that Allie was a “good person,” that hints we are going to see the darker side of the young mother.

We have seen how Sami reacted to Eric Brady (Greg Vaughan) marrying Nicole Walker Brady (Arianne Zucker). We have also seen how viciously Sami exposed Nicole’s betrayal, not even thinking how a public reveal would affect Eric. Could we see Allie react in similar ways to Johnny and Chanel’s relationship? We will have to keep watching the NBC soap to find out.