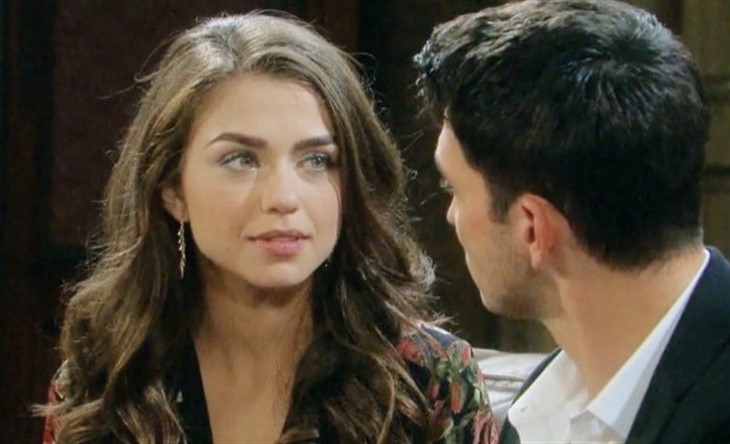 Days of Our Lives (DOOL) spoilers for next week of June 28 reveal that Ciara Brady (Victoria Konefal) comes to Salem. She waits for Ben Weston (Robert Scott Wilson) at the apartment they used to share. When Ben sees his wife, he is filled with joy and hope. However, his optimism quickly crumbles. Ben has one last chance to reunite “CIN” but will he succeed and if so, how?

DOOL comings and goings spoilers reveal that Ciara returns on Friday, July 2. She will be waiting for Ben at the place they used to live at together. Ben will come home and his heart will skip a beat seeing the woman he can’t forget. While he has a hope that she’s remembered their love for one another, Ciara’s visit has nothing to do with that.

She’s not alone in Salem, either. Theo Carver (Cameron Johnson) is with her, we assume for Eli Grant (Lamon Archey) and Lani Price Grant’s (Sal Stowers) one-year anniversary celebration.

Ciara sent Ben divorce papers and all he had to do was sign on the dotted line. He attempted to grant her request several times. But each time, he just couldn’t bring himself to do it. He confided in Rafe Hernandez (Galen Gering) about the situation, as well as him seeing Jordan Ridgeway (formerly Chrishell Stause).

Ciara’s visit won’t be due to her remembering her love for Ben. In fact, she demands to know why he won’t sign the divorce papers. She has called him several times asking him to just sign the papers. She is hoping that by confronting Ben in person, that it will help her finally get the divorce.

Days of Our Lives spoilers reveal that Ben will know that this is his last chance to reach Ciara. Despite fate pulling them apart repeatedly, Ben is convinced that they belong together. However, he has to play his cards carefully. If he pushes too quickly or too strongly, Ciara will run. This is literally his last chance to reunite “CIN.”

The storyline will end on a cliffhanger as the soap will go on a two-week break for the Olympics. We won’t find out if Ben is successful or not until the soap comes back on the air. However, it is hinted that Ciara will start to feel a connection to Ben, but only after they get divorced. These could also be other complications. Why does she need the divorce so badly? Is it because Theo has proposed to her? Is she pregnant with Theo’s baby? We will have to keep watching the NBC soap opera to find out.