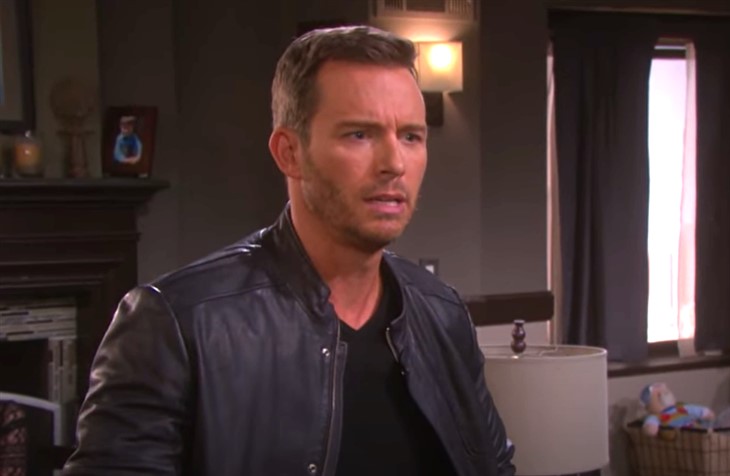 Days of Our Lives spoilers reveal that Brady Black (Eric Martsolf) denies hurting or killing Philip Kiriakis (Jay Kenneth Johnson). Despite having no memory, Brady insists he’s not capable of what he’s being accused of. Brady will remember a key detail from that fateful night and it will cause Chloe Lane (Nadia Bjorlin) to have a change of heart.

DOOL spoilers reveal that Brady is going through a horrifying ordeal. Not only does he have no memory of how he ended up at the riverbank with booze in his system, he has no idea how Philip’s blood ended up on his clothes. Brady denies knowing anything about the knife, the threatening text message or why he had Philip’s phone.

Now that Philip’s prosthetic leg has been found, the missing person case is a murder investigation. Despite all the mounting evidence, Brady insists he is innocent of any wrongdoing.

Belle Brady (Martha Madison) decides to act as Brady’s attorney and investigates the night in question. One of Belle’s tasks is to find out if Brady really was drinking that night or if someone put the alcohol in him another way. Belle might be suspecting Brady’s non-alcoholic drinks were spiked. However, Belle’s hopes are dashed when it’s proven that Brady ordered six shots at the pub that night.

Days Of Our Lives Spoilers – Visiting The Crime Scene

Days of Our Lives spoilers reveal that Brady becomes even more determined to clear his name. The only way he can do that since Philip is missing is by remembering what happened. Brady begs Chloe to go with him to the crime scene. Even though Chloe initially didn’t think this was a good idea, she will agree. Chloe isn’t really doing it for Brady, though. Chloe wants to know the truth about what happened that night.

Actor Eric Martsolf told Soap Opera Digest that the tactic actually works. Brady doesn’t remember a lot, but does get a flash of a key detail that is pretty significant. However, Brady still has to prove it and that will be a challenge.

“It’s a very enlightening memory that’s crucial to his case, at least in his mind it is. It’s not exactly something that he can prove right away, but it’s definitely something about that evening that helps him understand as to whether he is the combatant in this or whether Philip is. It’s definitely an, ‘Oh, my God’ moment. It’s a giant puzzle piece.”

It is teased that this memory will affect how Chloe views the entire mystery. Chloe will go from not being sure if Brady is innocent to completely supporting him. However, when Eli Grant (Lamon Archey) arrests Brady for murder, it will make proving his innocence even more difficult. The key to is to actually find Philip – but where is he and can he be found before Brady goes to prison for a murder he didn’t commit?