Days Of Our Lives Spoilers: Belle Suspicious Someone Framed Brady! 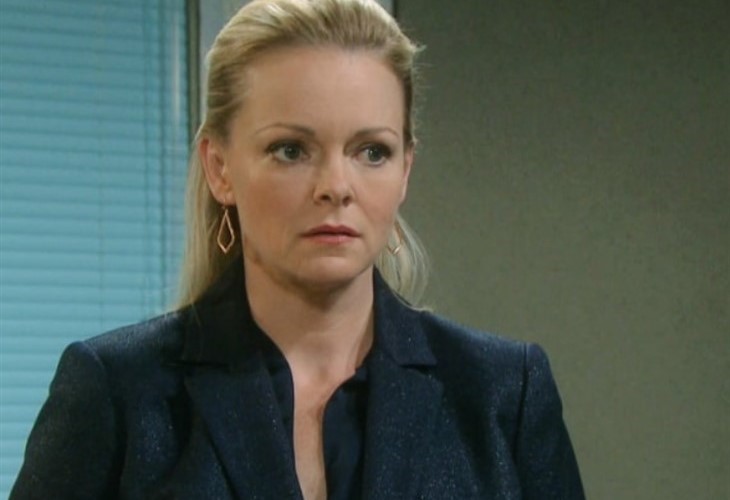 Days of Our Lives (DOOL) spoilers tease that Belle Brady (Martha Madison) will be suspicious that someone’s framed her brother Brady Black (Eric Martsolf) and she’ll try to prove her case to Shawn Brady (Brandon Beemer) in an upcoming episode of Days of Our Lives!

Days Of Our Lives Spoilers – Brady Couldn’t Remember What Happened

Days of Our Lives viewers will recall that Belle has taken on the representation of her brother Brady, who has now been arrested for the murder of a not-so-dead Philip Kiriakis (Jay Kenneth Johnson)! Days of Our Lives viewers will remember that District Attorney Melinda Trask (Tina Huang) put all the members of the Salem Police Force under intense pressure to make a case and arrest Brady.

Melinda needs a big win, especially now that Kristen DiMera (Stacy Haiduk) is in the wind, and even pressured Philip’s parents, Victor Kiriakis (John Aniston) and Kate DiMera (Lauren Koslow) into signing a declaration of death so that the case could move forward – after which, of course, Kate found Philip sitting on her bed in her room at the Brady Pub! In the meantime, Brady had insisted to Chloe Lane (Nadia Bjorlin) that he had to go down to the river to see if it would jog his memory regarding what happened that night. Days of Our Lives viewers will recall Brady couldn’t remember, after Philip knocked him out with a crowbar and dragged him away!

Days of Our Lives viewers then saw Trask herself along with Eli Grant (Lamon Archey) who was compelled to arrest Brady for Philip’s murder, haul him off in cuffs in front of a shocked Chloe! Brady had started to remember telling Philip to get his hands off him. Days of Our Lives viewers will recall that Brady had been found unconscious by the river, blood all over him, and a bloody knife by his hand which later was determined to be a DNA match to Philip’s blood.

Divers had found Philip’s prosthetic leg in the river, after a bloody trail was found down to the riverbank, and Brady’s watch was found earlier next to where Philip had himself pulled up his and Chloe’s tree by the roots! Chloe then went to look for Brady while Philip dragged him from where he had him hidden down to the bank and then disappeared, after sending threatening texts to himself from Brady’s phone and then putting his phone in Brady’s pocket! Plus Brady was found to be very drunk but denied drinking the seven shots of whiskey on the receipt that Roman Brady (Josh Taylor) provided to Belle. This case is just packed up too neat and tidy in Belle’s opinion for Brady not to have been framed!

Days of Our Lives viewers know already that Shawn won’t need a whole lot of convincing to believe that Brady may have been framed! After all, a body has not yet actually been found although the evidence seems to point to Philip having been murdered. Days of Our Lives viewers know that Trask was so anxious to get another win in her pocket that she’s more or less railroading Brady into a conviction! Otherwise, why would she have gone down to the river with Eli herself to make sure that Brady was arrested?

Previously, Eli and Lani Grant (Sal Stowers) had refused to move forward with an arrest when there was no body, which is why Trask conned Victor and Kate into signing the papers to have Philip declared dead based on the evidence which is now being used in the murder case! Usually it takes seven to ten years of absence for a declaration of death to go through legally, but Trask pushed it through in about seven minutes! Shawn agrees that a rush to judgment has been made, but the only way to make sure Brady is free is to either prove he was framed, or find Philip alive!

Days Of Our Lives (DOOL) Spoilers: A Very Salem Christmas – NOT Must See TV