Days Of Our Lives Spoilers: Allie Tells Tripp A Secret, Steve And Kayla Get Involved In Mystery 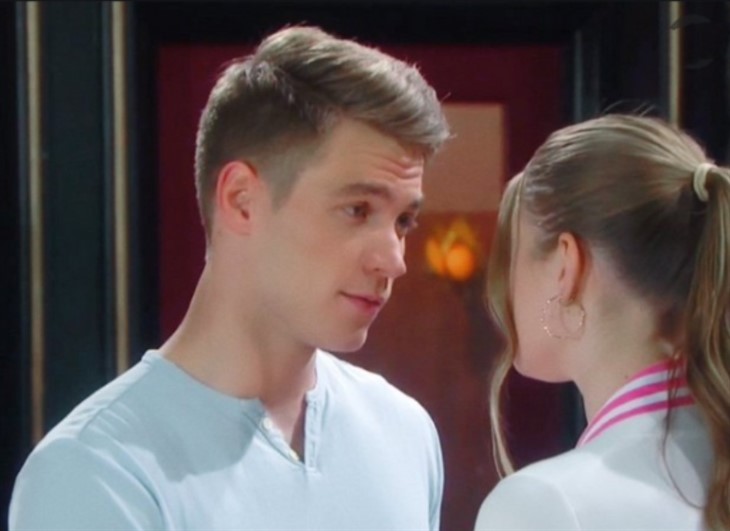 Days of Our Lives spoilers reveal that Allie Horton (Lindsay Arnold) finds out about her family’s shocking past. Allie doesn’t believe it at first, which prompts her to go to John Black (Drake Hogestyn). After learning the possession story is actually true, Allie confides in Tripp Johnson (Lucas Adams), which could get “Stayla” involved in the upcoming mystery.

DOOL spoilers reveal that Will agrees to send Johnny DiMera (Carson Boatman) the script he wrote about Sami DiMera’s (Alison Sweeney) life all those years ago. As Johnny reads “The Sami Brady Story,” he learns about Marlena Evans’ (Deidre Hall) possession. This causes him to jump up as he can’t believe what he is reading. Johnny knew that his family had some craziness in the past, but never heard about his grandmother being possessed.

After Johnny reads about Marlena’s possession, he turns to his twin sister. Johnny tells Allie about it, but she isn’t sure if it’s actually a true event.

Allie decides to ask John about Marlena’s possession. It is a painful part of John and Marlena’s past, but Allie is given some of the details. Allie can’t believe that it’s actually true. Over the years, Allie has gotten used to her family having some crazy history, However, she never imagined that the devil was actually involved at one point.

Days of Our Lives spoilers for the week of September 27 reveal that Allie decides to talk to someone about what she’s discovered. Allie feels that the possession is John and Marlena’s story, and shouldn’t be part of Johnny’s movie. However, she also knows that Johnny is going to do what he wants. Allie can’t help but be concerned that Johnny might taunt the devil by opening the possession door back up. What Allie — and everyone else — don’t realize is that the devil is already back in Salem.

Allie turns to Tripp and tells him about Marlena being possessed over a quarter of a century ago. Johnny might not listen to Allie’s concerns, but she knows that Tripp will whether he believes in possession or not.

After Tripp learns about Marlena’s possession, he will probably confide in Steve “Patch” Johnson (Stephen Nichols) and Kayla Johnson (Mary Beth Evans). The couple have been good friends with John and Marlena for many years. So, if anyone can shed light on the subject or even confirm the possession to Tripp, it will be “Stayla.”

The devil has already possessed Doug Williams (Bill Hayes) and has revealed itself to Marlena. So, it’s only a matter of time before the devil jumps into Marlena’s body. The last time that Marlena was possessed, it took a long time before anyone realized what was happening. Will it take that long this time, or could John, Steve, Kayla, Allie and others recognize what is happening before it’s too late?