Days of Our Lives Spoilers: Abigail Desperately Needs Something From Chad 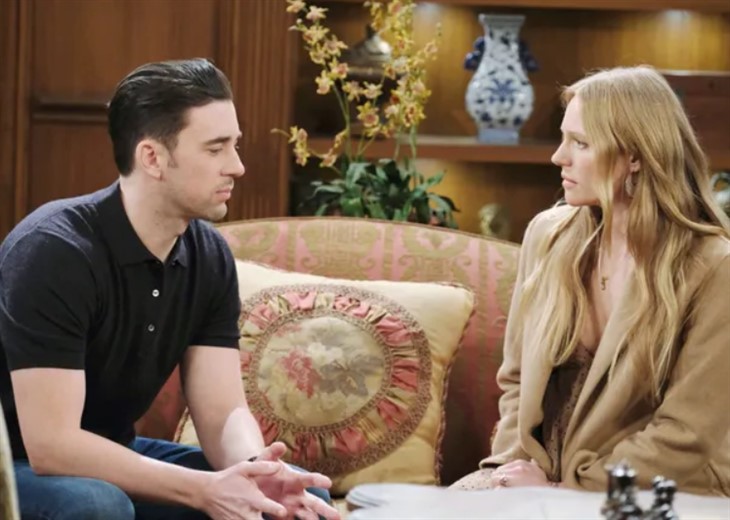 Days of Our Lives (DOOL) spoilers for Friday, September 17, 2021, reveal Abigail needing Chad to do something for her now that she’s agreed to live with him again.

Days Of Our Lives Spoilers – Is Abigail Ready To Resume Her Marriage?

Chad’s (Billy Flynn) betrayal with Gwen (Emily O’Brien) and inability to trust her sent Abigail (Marci Miller)out of town for months. She used the excuse that she had to help Jennifer (Melissa Reeves) settle Laura’s (Jaime Lyn Bauer) estate, but she really just wanted to get away from her husband. Now, Chad has managed to convince her to come home but all is not well yet.

On Friday, Abigail has a major request of Chad. Since she still doesn’t really want to be anywhere near him, does she ask him to make sure they have separate bedrooms? That won’t bode well for their marriage, but typically neither does Chad’s attitude.

DOOL Spoilers –  Johnny DiMera ‘s Movie Could Cause A Problem

Now that Marlena (Deidre Hall) knows what Johnny’s (Carson Boatman) movie is about, Marlena is a bit disconcerted. After all, it’s going to dive into some deep family secrets. They may not be secrets in Salem, but she doesn’t want the whole world to know about that time she slept with John Black (Drake Hogestyn) on top of a desk with Sami (Alison Sweeney) walking in and seeing all of it.

Marlena and John discuss that time in their lives and how it changed the course of Sami’s life forever. It even led Sami to kidnap and sell Belle on the black market because she didn’t want the result of that affair to hurt her dad, Roman. It looks like DOOL is going far back into the past all the way this fall.

Days Of Our Lives Spoilers – What Is Really Wrong With Doug Williams?

It took a lot for Doug (Bill Hayes) and Julie (Susan Seaforth Hayes) to go to Kayla (Mary Beth Evans) and have her run tests on Doug. They are afraid of what a dementia diagnosis could mean but is that what Kayla finds? On Friday, they learn the results of the tests Kayla ran and it looks like it could be stunning. Stay tuned to Days of Our Lives weekdays to see how these stories play out.