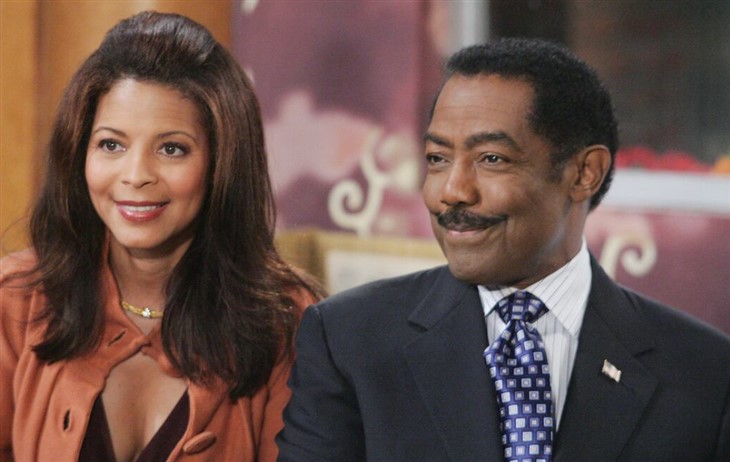 Days of Our Lives spoilers reveal that the preview for the week of October 25 confirms that Abe Carver (James Reynolds) dies. However, the story doesn’t end when Abe’s heart stops beating. Lexie Carver (formerly Renee Jones) tells Abe he can stay with her in heaven or return to his mortal body. Which option will he choose?

DOOL spoilers reveal that Kayla frantically works on Abe in order to save his life. The official Twitter account for the NBC soap shared a preview for the upcoming week. In one scene, Abe flatlines and Kayla begs Abe to hold on. In another scene, Kayla makes the announcement that everyone is dreading.

Kayla looks completely defeated when she makes the announcement to the surgical team. As everyone takes off their gear, Kayla stands in front of Abe’s body in the operating room. Her hands drop to her side as she appears both emotionally and physically limp. Kayla weakly says,

Days of Our Lives spoilers reveal that the preview shows Julie Williams (Susan Seaforth Hayes) reacting to the news of Abe’s death. Julie is in a state of shock and can’t believe that Abe is gone. The character was introduced to viewers 40 years ago. It is confirmed that Abe’s friends and family will reflect on the influence that Abe had in the town, both as a family man, friend, police officer, mayor and all the other roles he has played.

Even though Kayla announces that Abe is dead, that’s not the end. Abe is given a choice when he arrives in the afterlife. Reuniting with his dead wife, Abe is told he has a choice. The mayor can stay with Lexie on the other side and everything will be perfect, or he can return to Salem, which is quickly turning into hell on Earth.

The devil has taken full control of Marlena Evans (Deidre Hall) and lives are in danger. Plus, Ciara Brady Weston (Victoria Konefal) is pregnant, which the devil was counting on. Abe would love to stay with Lexie, but decides to return to the earthly realm for a reason. Perhaps it’s because all the people that he loves are at risk. It’s possible that Lexie will give Abe information that is necessary to defeat the devil.

What do you think makes Abe say goodbye to Lexie and return to the mortal world? Could it have something to do with Abe’s children or grandchildren? Or could this be tied to Marlena’s possession story and “CIN” having a baby? To find out, we will have to keep watching the NBC soap.