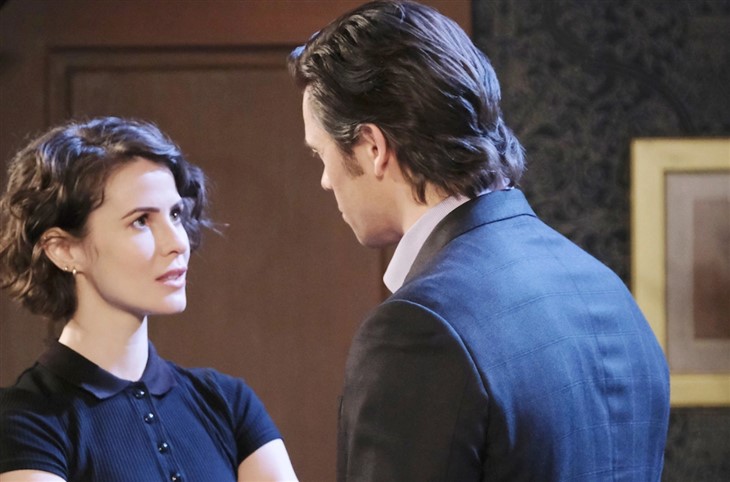 DOOL spoilers reveal that Sami tried to call EJ DiMera (Dan Feuerriegel), which obviously didn’t go too well. Then, Sami got through to Marlena Evans (Deidre Hall) during a brief time that the devil wasn’t possessing her. However, Marlena was in no position to help Sami as she was chained to a wall. Then, the phone call was intercepted by fake Kristen DiMera (Eileen Davidson), who was really the devil.

In the promo, Sami paces as she goes into panic mode. Sami is desperate to escape, as well as to find out who is responsible for her abduction. We know that Sami does smack the guard over the head with a dinner tray. Then, she gets out one door but ends up reaching a dead end. When the guard wakes up, Sami is really in trouble!

Meanwhile, Xander will interrogate Susan about Sarah’s whereabouts. Xander gets clued in not by Gwen Rizczech (Emily O’Brien), but by Rex Brady (Kyle Lowder). However, Susan had nothing to do with it and ends up telling him the truth about Kristen’s masquerade. This is when Xander finally realizes that Sarah wasn’t acting like herself because she literally was someone else… Kristen DiMera!

Days of Our Lives spoilers reveal the promo shows Xander angrily confronting Kristen. However, will Kristen admit to the truth about Sarah? Or will she just tease Xander by not saying where Sarah is being held? Xander is determined to find out the truth, even if he has to take extreme measures.

At the end of the promo clip, a man is being dragged away. All we see are his legs and it appears that he’s wearing uniform pants. So, it could be a prison guard, which means Kristen does manage to escape with Gwen and Ava Vitali’s (Tamara Braun) help. Or, it could be the guard that is watching Sami. To find out, we will have to keep watching the NBC soap!

Who do you think is responsible for kidnapping Sami and what do they want? How will Xander find Sarah and how will Gwen explain knowing but never saying a word? Let us know your thoughts and predictions.