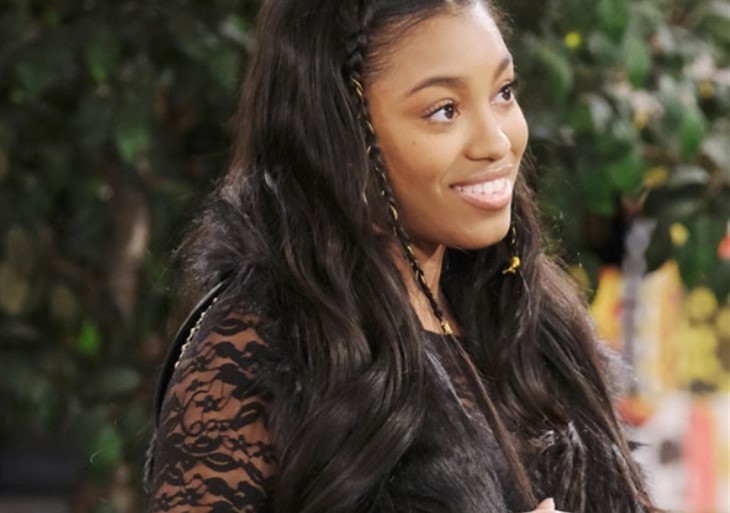 Days of Our Lives (DOOL) spoilers tease that Theo Carver (Cameron Johnson) just broke up with his girlfriend, so the last thing he was expecting or wanting was for her not only to show up in Salem, but to be a part of his sister Lani Grant’s (Sal Stowers) extended family. As it turns out, his ex is none other than Chanel Dupris (Precious Way). Precious hasn’t exactly made a good first impression with several of Salem’s residents.

Days Of Our Lives spoilers – Chanel Dupris Tried To Con Claire Brady But Claire Wasn’t Having It!

Claire Brady (Isabel Durant) was the first to see through Chanel. Chanel pretended to befriend Claire and offered to share the most expensive bottle of alcohol they could order. But Chanel had no intention of paying, and tried to sneak off without paying a dime. As it turns out, her mother Paulina Price (Jackee Harry) showed up just in time. She payed Chanel’s tab but as soon as they were alone, Paulina showed some tough love by revealing she had cut Chanel off financially because she’s become entitled because with her mother’s wealth, Chanel had never had to have a job. But Paulina told a mortified Chanel that was going to change because she’s going to have to pay her own way going forward.

DOOL Spoilers – Theo Carver Seems To Be The Exact Opposite Of Chanel Dupris!

Where Chanel is wild and morally challenged, Theo is almost her polar opposite. He’s a hard worker and has a very strong sense of right and wrong. It’s hard to imagine a world where these two even considered becoming a couple. But Claire also had a bit of an attitude issue when she and Theo were together so he must be attracted to the bad girls. The problem with that is no matter how much chemistry they have, if they can’t meet somewhere in the middle, then their relationship won’t work out.

We don’t really know many details about Theo and Chanel’s relationship, but she was probably much nicer when she was spending her mother’s money. Will they pool their resources and become roommates since Chanel will have to pay her own way. But she may be counting on being able to manipulate Theo into paying her expenses. But Theo will likely get a heads up from Paulina so hopefully he won’t get in the way of Paulina’s lesson for her spoiled daughter.

Is there a side to Chanel that we haven’t seen yet that explains why Theo was attracted to her? Does Theo still have feelings for his ex, or is he seeing that now that she is cut off, she can be nasty. Or should Theo just throw caution to the wind and see if he and Chanel can make a relationship work after all? Trouble has arrived in Salem, so stay tuned to Days of Our Lives airing weekdays on NBC to see how much damage Chanel will do. And don’t forget to check back right here regularly for all your Days of Our Lives news, information and spoilers!

Would Simon Cowell Risk His Friendship With Prince Harry & Bring Piers Morgan Back To BGT?