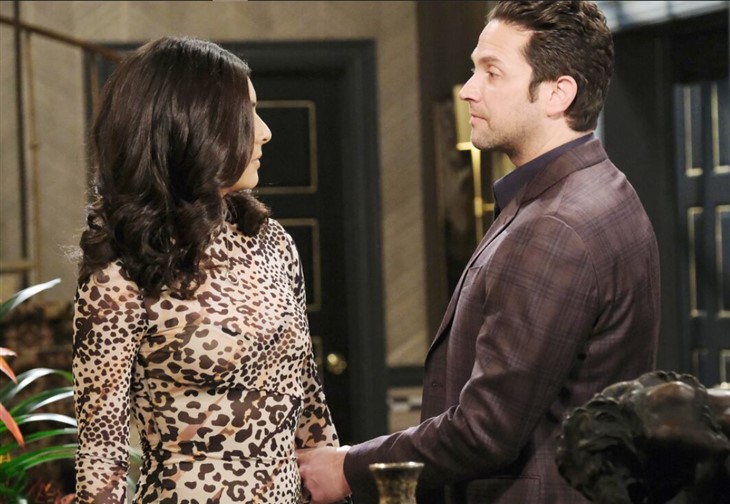 Days Of Our Lives Spoilers – Gabi Hernandez And Jake DiMera Are Attracted To Each Other, But Their Hearts Are Elsewhere

Days of Our Lives viewers will remember that Gabi’s one true love was Jake’s late twin, Stefan DiMera (Brandon Barash). When she first encountered Jake in Salem, she was certain that he had amnesia and that he was really Stefan.

Over time, it was finally proven to her that he is Stefan’s twin, once the truth came out that Ivan Marais (Ivan G’Vera) had fooled “Madame” Vivian Alamain (Linda Dano) years ago and given one of her twin sons up for adoption. He grew up to be Jake!  Days of Our Lives recaps reveal Jake and Gabi had started a relationship once she wanted him for himself, but then their relationship was interrupted by Gabi and her brother Rafe Hernandez (Galen Gering) having to go to Mexico.

By the time she returned, Jake had moved on with Kate Roberts (Lauren Koslow)! Days of Our Lives viewers will recall Gabi was very unhappy about that, but her heart still belonged to Jake’s late brother, Stefan – and Jake was not about to be his replacement in her heart. He didn’t seem to mind being his replacement in her bed, however. Days of Our Lives viewers will remember more recently that Gabi couldn’t go through with having sex with Philip Kiriakis (Jay Kenneth Johnson) because she found she hadn’t completely moved on!

She claimed it was from Jake, but Jake still thinks he’s only a replacement for Stefan! In the meantime, Kate caught Kristen DiMera (Stacy Haiduk) in the act of impersonating Susan Banks (Stacy Haiduk), and Kristen trapped her in the wine cellar at the DiMera mansion! Kristen conveniently had a Kate mask and wig with an apparatus that changes her voice just like she had of Sarah Horton (Linsey Godfrey) who she packed in a steamer trunk and sent to a Greek island! Kristen as Kate broke up with Jake, and blamed his attraction to Gabi!

Days of Our Lives viewers will recall from recent Days of Our Lives episodes how devastated and blindsided Jake was when “Kate” dumped him! He poured his heart out to Ben Weston (Robert Scott Wilson) who had just made the very difficult decision to let Ciara Weston (Victoria Konefal) go and give her space to remember what he and she meant to one another.

Now, he encounters Gabi in the DiMera mansion, and he grabs her by the arm demanding what she said to Kate to make her dump him! DOOL spoilers show Jake is angry and livid when he realizes that Gabi may be the reason that Kate dumped him! Jake was aware that Gabi and Philip had been seeing each other, because that is what he unexpectedly became a little jealous over, and he had told real Kate shortly before Kristen as Kate dumped him.

Jake had only wanted to have everything pure and honest between himself and Kate on Days of Our Lives – no secrets. She had previously agreed, and thought it was a good idea, so naturally Jake was blindsided when “Kate” ghosted him for the romantic trip they were planning and then suddenly dumped him and told him it was because of his jealousy over Gabi!

Either Kristen overheard the conversation between him and real Kate where they discussed his little pang of jealousy, or else Kristen just made a very good guess! For her part, with Jake acting like a Neanderthal and grabbing her arm, she is not about to admit there is still any attraction to him at all, and the two get into a very physical argument, and the “sparks” between them for the time being are sparks of anger!

Time will tell if they are able to work out their differences on NBC Days and if Gabi wants Jake for Jake, or as a living replacement for his late twin brother Stefan!