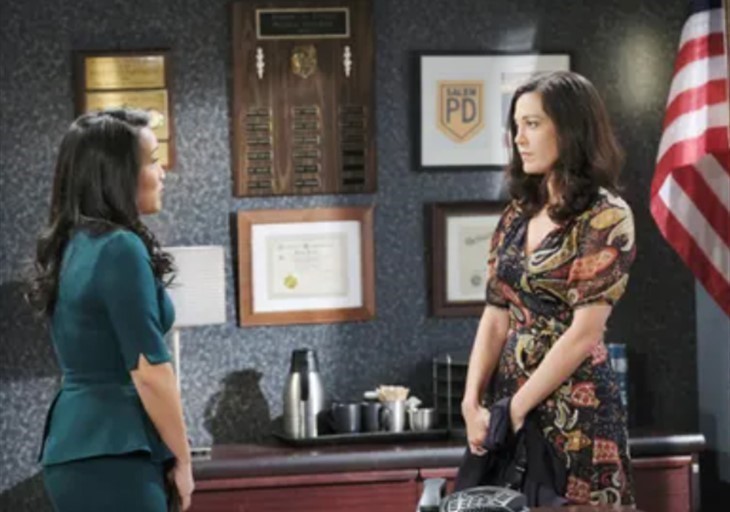 Days of Our Lives (DOOL) spoilers for Monday, May 3, 2021, reveal Kristen encountering the completely unexpected and Gwen using a fall to her own advantage.

Days Of Our Lives Spoilers – Kristen Doesn’t Like Being Kate

Wandering around Salem as Kate Roberts (Lauren Koslow) is not as grand as Kristen (Stacy Haiduk) thought it would be. Sure, she managed to convince Jake (Brandon Barash) that Kate was breaking up with him but she didn’t expect someone else to want Kate — and that someone else is Roman Brady (Josh Taylor).

Kristen is not sure how to act when Roman starts flirting with her thinking she is Kate. This is not what she bargained for and is not sure how to get out of this mess. At least Vivian (Linda Dano) will be pleased with her, right?

And apparently Jake was not all that attached to Kate cause he is already looking in Gabi’s (Camila Banus) direction and it’s not even been a day since Fake Kate dumped him. Jake sure knows how to show his loyalty to a woman. First, he dumped Gwen (Emily O’Brien) for Gabi, and then when Gabi left, he turned to Kate. Now that Fake Kate dumped him, it’s back to Gabi since Gwen is doing other things.

DOOL Spoilers – Gwen Rizczech Tells A Whopper Of A Fib

Gwen is busy lying about what really happened on those stairs. She hysterically claims that Abigail (Marci Miller) pushed her rather than telling the truth that her fall was an accident. Abby just wanted to kill her baby, Gwen says. She doesn’t mention she thought something was wrong with her baby even before the DiMera Stairs incident.

This prompts Jack (Matthew Ashford) and Chad (Billy Flynn) to have a chat with Abby about her state of mind at the time and what she really wanted to do to Gwen. Did she push her on purpose? Is she losing her mind again?

Abigail can’t believe the two men she loves most in the world just refuse to believe her and take Gwen’s word over hers. What kind of power does Gwen have that people trust her when she’s a known habitual liar? Stay tuned to Days of Our Lives weekdays to see how these stories play out.