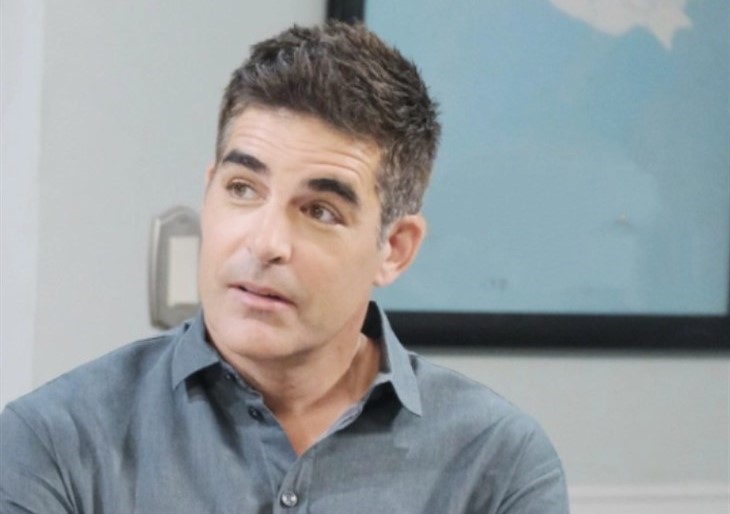 Days of Our Lives (DOOL) spoilers tease that Rafe Hernandez (Galen Gering) will give Ben Weston (Robert Scott Wilson) some badly needed advice about Ciara Brady Weston (Victoria Konefal) in an upcoming episode of Days of Our Lives!

Days of Our Lives viewers will remember that Ben has not been able to let go of Ciara. No one can really blame him, considering he was one of the few people to believe she was still alive all those months when she was in captivity. Ben was the driving force behind Ciara’s rescue, after having been held captive in a glass prison, first by Vincent Belman’s (Michael Teh) pilot Allan Rhodes (Jason Downs) then Evan Frears aka Christian Maddox (Brock Kelly).

But, as Days of Our Lives, viewers will also remember, things did not go the way that Ben had hoped, as the glass room exploded before Ben could free Ciara, and then when she came to she had amnesia. She didn’t remember Ben as anything except the Necktie Killer and couldn’t believe she would have fallen in love with and married him, even when she had been presented with proof by Ben!

She then went back to Johannesburg, South Africa with Theo Carver (Cameron Johnson) who she had dated in the past, long before she met Ben. As shown in the Days of Our Lives summer preview, Ben burns the divorce papers Ciara sent and she shows up in Salem, likely with some more divorce papers that she will demand signed in front of her! Ben still won’t give up on trying to win her back!

Days of Our Lives spoilers will remember that Rafe was married to Hope Williams (Kristian Alfonso) for several years, and he was Ciara’s stepfather during that time. As a result, Rafe knows Ciara pretty well and he remembers more of what Ciara was like before knowing Ben, which is a lot like the way she is now after waking up from her coma. Rafe knows what Ben, and Hope, went through when no one but them would believe that Ciara was dead – they had put their hope in Ciara’s wedding rings being found, after Vincent Belman’s car exploded at the airstrip.

Days of Our Lives viewers will remember that both Hope and Ben felt like it was a breadcrumb from Ciara to let them know that she had survived! Rafe will likely give Ben the advice that he needs to give Ciara the space she wants, which he has to some point, and let her have the divorce she wants. Rafe will remind Ben that no matter how much he wants things to go back to the way they used to be, Ciara may never remember their love. Rafe had to move on from Hope and others, and although he had a desire to reconcile with Hope when he returned from Mexico and actually tracked her down, Hope did not want to reconcile. Rafe was forced to leave it like that and Ben essentially is being forced to as well, with Ciara. After all, if Ciara does remember and wants to come back, they can always remarry. It doesn’t make Ben feel a whole lot better, but it does start to make sense.