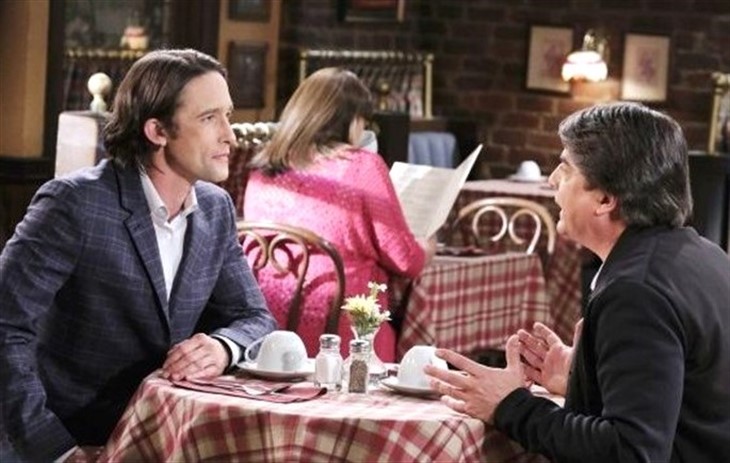 Days of Our Lives (DOOL) spoilers tease that in Salem Philip Kiriakis (Jay Kenneth Johnson) will take matters into his own hands to help his brother in an upcoming episode of Days of Our Lives!

Days of Our Lives viewers will recall that Lucas Horton (Bryan Datillo) very nearly gave EJ DiMera (Dan Feurreriegel) the letter he retrieved from the DiMera fireplace in a recent episode of Days of Our Lives. He would have had his and Philip’s mother, Kate Roberts (Lauren Koslow) not come into EJ’s office and interrupted. Then, as Days of Our Lives viewers will recall, Lucas went over to Brady’s Pub to have something to eat and to think, and his half-brother Philip came along. They sat down at a table together and started to talk. Lucas confessed that he and Sami DiMera (Alison Sweeney) had slept together twice after Philip asked him some pointed questions- and then Philip suggested that EJ learns the truth without Sami ever knowing that it came from Lucas.

The two of them then started plotting as Sami herself did some plotting over at the Horton House, offering to pay Xander Cook (Paul Telfer) to spill the tea about Nicole Brady (Arianne Zucker) and himself, in an effort to get ahead of Nicole spilling about Sami and Lucas to EJ by getting proof that Nicole had cheated on Sami’s twin, Eric Brady (Greg Vaughan). Now Philip will take matters into his own hands to help Lucas which they hope will result in Sami leaving EJ for Lucas, provided Sami doesn’t mess up everything herself with her plotting.

DOOL Spoilers – Philip Kiriakis Comes Up With A Plan

Days of Our Lives viewers may see that Philip will have a distinct advantage in more ways than one when it comes to helping Lucas break up Sami and EJ. For one thing, longtime Days of Our Lives viewers will remember that Philip has lots of experience with EJ – and none of it good. EJ, along with his late father Stefano DiMera (Joseph Mascolo). They put two hits out on Philip, resulting in Victor Kiriakis (John Aniston) and Philip arranging for Stefano to be kidnapped, and then held him hostage, denying Stefano his insulin. Victor then demanded that EJ sign over the rights to DiMera Enterprises in return for Stefano.

Philip also did a short stint in the ISA. There has been a long-standing feud between the Kiriakis and DiMera families, and Philip will be more than happy to do something to get back at EJ and help Lucas to win Sami back in the process. He will have to take care not to do anything do endanger Kate, however so he will have to plan carefully – and make sure his mother doesn’t see him carrying out his plan. Neither Lucas or Philip like EJ and neither like their mother working for DiMeras.

Chad DiMera (Billy Flynn) is the least dangerous of them but now he has aligned himself with EJ. He could deliver the letter in a manner that it wouldn’t be traced back to Lucas but that won’t protect Sami, and Lucas would want Sami protected. As it turns out, many people will find out many things during Eric and Nicole Brady’s (Arianne Zucker) anniversary party, and EJ will find out the truth about Sami and Lucas in spite of what Lucas and Philip do!