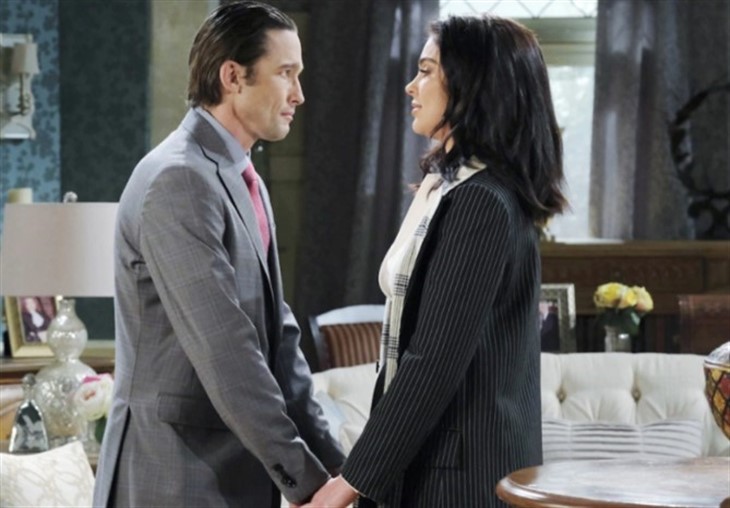 Days of Our Lives (DOOL) spoilers tease that Philip Kiriakis (Jay Kenneth Johnson) and Chloe Lane (Nadia Bjorlin) will revisit their old romance from high school days and hook up on an upcoming episode of Days of Our Lives!

Days Of Our Lives Spoilers – Brady Black Who?

For Chloe to hook up with Philip suddenly seems a bit strange, since she was just recently trying to reignite the flames of romance with Brady Black (Eric Martsolf)! Chloe had attempted to confess her feelings for Brady, but something just didn’t go right. Perhaps Brady started talking about missing his baby mama Kristen DiMera (Stacy Haiduk) and Chloe realized he just wasn’t going to budge, even after she asked him could he stay in a relationship with someone who would be in prison for several years yet. Surely Chloe’s old feelings for Brady didn’t just go away – so why would she hook up with Philip all of a sudden? The three, Philip, Chloe, and Brady go way back – as far back as high school.

Chloe was the nerdy girl and Philip was hanging out with a couple of other rich brats, Jan Spears (Heather Lindell) and Jason Welles (Aaron Von Wagner). Philip, Jan and Aaron had made it a point of bullying Chloe until Philip saw a different side of her when he took her for a date on a dare. He fell in love with her, but the relationship hit a big snag when she accused him of rape-falsely. They made up, but then he dumped her after nude photos of her appeared at the Last Blast dance. (Sounds like something Jan might have done!) After that he wasn’t able to get anything going with Chloe and she found love with Brady. At that point, Philip joined the military! They tried dating several times after he returned to Salem, always breaking up over one thing or another.

One has to wonder if Chloe hooks up with Philip in an attempt to make Brady jealous. It just seems like she perhaps has some old feelings for both men and if she’s trying to get back with Brady but sleeps with Philip, either she doesn’t know who she wants or else she and Philip are pretending to hook up for Brady to discover! Chloe had very serious relationships with both men, and more than once. She dated and broke up with Philip several times and married Brady but divorced him due to his addiction problem. But the Brady-Chloe-Philip triangle actually started in high school, when she dated Philip while she was falling for Brady. This seems to be a repeated pattern for Chloe!

Perhaps Chloe realizes she is getting old feelings back for Philip, since he was actually her first love. After all, it is said that one never truly gets over a first love. There are two major differences between Philip and Brady – Brady has overcome his addictions and has made something of himself, but Philip is still fighting his addiction to gambling and has his job at Titan only because he’s Victor Kiriakis’ (John Aniston) son. Chloe is with Brady all the time at work, yet she felt protective of Philip and Brady was shot because of her protection of Philip! Yet, here she is – hooking up with Philip while fighting feelings for Brady!