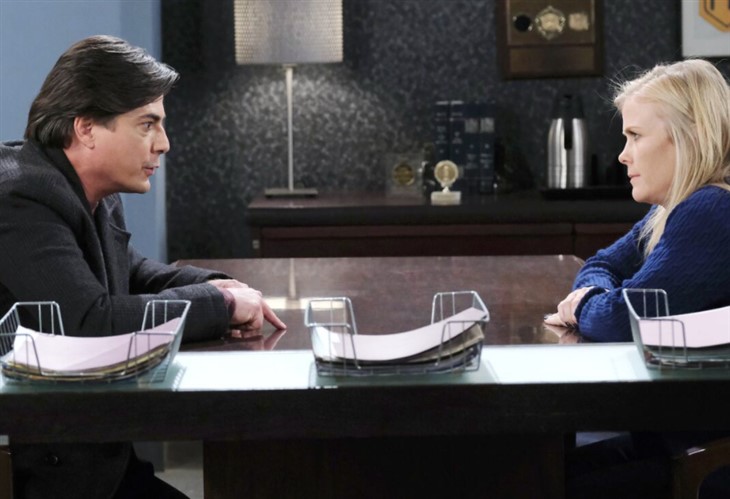 Days of Our Lives (DOOL) spoilers for the week of March 22 reveal that in Salem there are two confessions. The first comes from Sami Brady (Alison Sweeney), who finally tells Rafe Hernandez (Galen Gering) the truth. The other confession just happens to be Sami’s daughter, Allie Horton (Lindsay Arnold). Despite there being two confessions, this murder mystery is far from over.

DOOL spoilers reveal that this week, we are seeing Lucas visit Sami at the police station. He wanted to know the whole truth and Sami told him exactly what happened. Even though Sami thinks she might be protecting Allie, Lucas was the voice of reason. Until they ask Allie if she killed Charlie Dale (Mike Manning), they don’t know who Sami is protecting. She could actually be covering for someone she would never go to prison for.

It is teased that Sami ends up telling Rafe the truth during the week of March 22. She explains why she was found at Charlie’s apartment. She will also tell Rafe why her fingerprints were found on the gun. Her explanations might be true but he ends up making a discovery that points the finger at another suspect.

Days of Our Lives spoilers reveal that Rafe gets the ballistics report, which confirms the gun used to kill Charlie belongs to Kate Roberts DiMera (Lauren Koslow). So, Rafe will be chasing a new suspect once he finds out from Sami that Charlie was already dead when she got there. He now knows her story about why her fingerprints were on the gun. That doesn’t necessarily mean she’s innocent, but as a law enforcement officer, Rafe has to investigate every angle.

It is stated that Allie has been carrying a lot of guilt on her shoulders. Ever since her mother’s arrest, Allie has blamed herself. She hasn’t admitted to killing Charlie but still feels responsible. Both Lucas and Claire Brady (Isabel Durant) suspect that Allie might have killed Charlie. Lucas will question his daughter about it and she tells him the story of what happened that day. However, this storyline is going to last 2-3 months. So, it’s unlikely that Allie killed Charlie, either. Before the true killer is identified, expect a lot more twists and turns.

Days of our Lives Spoilers: Head Writer Ron Carlivati Got 'All the Feels' After Meeting Jackée Harry #Days #DOOL #DaysOfOurLiveshttps://t.co/XYUav6M81z

Do you think that Sami is telling the truth about what happened the day of the murder? What will Kate say when she’s interrogated? Did Allie kill her rapist or do you have another theory on the murderer’s identity? We will have to keep watching the NBC soap to see how this story ends.

Be sure to catch up on everything happening with DOOL right now. Come back often for The Days of Our Lives spoilers, news, and updates.

The Bold and the Beautiful (B&B) Spoilers: Did Vinny Mean Well? Helped Thomas But Everyone Else