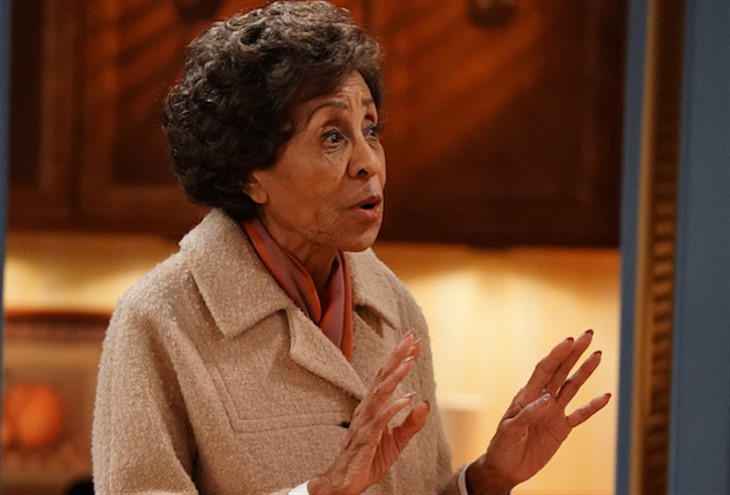 Days of Our Lives (DOOL) spoilers confirm that Marla Gibbs has been cast as Olivia Price. What brings Paulina Price’s (Jackée Harry) mother to Salem? We have some pretty good ideas and for those that don’t know, both actresses worked together before… on 227. In fact, Gibbs was recently awarded a star on the Hollywood Walk of Fame.

DOOL spoilers confirm that Gibbs will reunite with Harry in another television show. They worked together in 227 and will now work together in Days of Our Lives. Gibbs is best known for playing Florence in The Hendersons. According to Soap Opera Digest, Gibbs will make her debut in Salem on August 17.

We don’t have any details for Olivia yet, but we have plenty of theories! However, Harry previously stated that the soap was trying to diversify and bring in more black characters. They are working on that and it looks like the Price family will be expanding. It’s been a while since Salem has had a black family featured, especially ones that are on the front burner.

It used to be the Carvers, but Abe Carver (James Reynolds) is the only full-time cast member of that family left. We do have Theo Carver (Cameron Johnson), but it’s not clear if he’s staying or only in Salem to be part of Ciara Brady’s (Victoria Konefal) amnesia story. In any case, the soap does need to diversify and it looks like we are going to start seeing that.

Days of Our Lives spoilers reveal that Paulina has really made a mess of her life since arriving in Salem. Chanel Dupree (Raven Bowens) hasn’t done much better, but kids often mimic their parents’ behavior. Paulina is trying to fix her mistake of turning Horton Town Square into Price Town. She lied and betrayed a lot of people, including her own family and love interest. Despite her apologies and promises, most people in Salem don’t believe her.

We are having a hard time understanding Paulina and her mother might serve that purpose as one of her first storylines.

Olivia just might fix Paulina’s messy life, including her family relationships. There seem to be bigger problems between Paulina and Chanel than just Horton Town Square. Paulina told some stories to justify her behavior. However, Harry told Soap Opera Digest that Paulina has a good heart, but “lies a lot!” So, perhaps we will get to the truth of what makes Paulina tick. Paulina might have made up a lot of stories that will make us angry. Or, perhaps the truth is far worse and more heartbreaking than Paulina’s lies.

The Bold And The Beautiful Spoilers: Who Will Be Thomas’ New Love Interest?