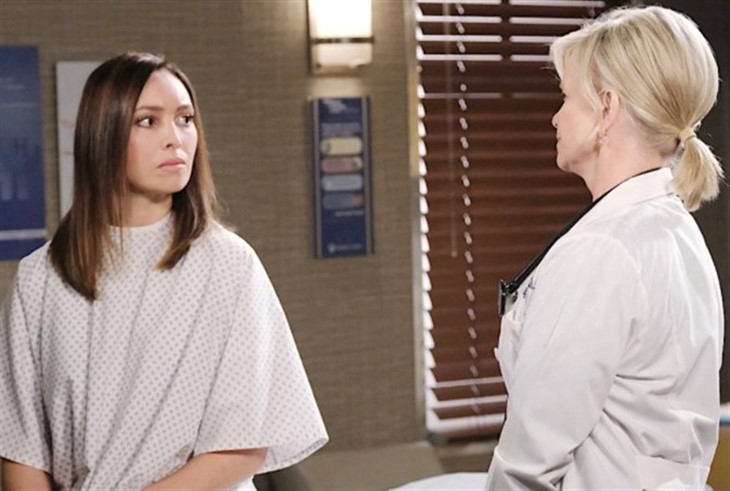 Days of Our Lives (DOOL) spoilers for May Sweeps reveal that Gwen Rizczech (Emily O’Brien) is keeping her baby. However, she ends up having a pregnancy crisis and it sounds like she loses the child. It is confirmed that it will result in tragic consequences for everyone involved. Gwen might demand an investigation into the death of her unborn child.

DOOL spoilers reveal that Abigail DiMera (Marci Miller) demanded that Gwen get an abortion. The manipulator seemed like she was seriously considering it. However, Kayla Johnson (Mary Beth Evans) told her she was already past the second trimester. So, Gwen decides to keep the child rather than jumping through the legal hoops. Chad DiMera (Billy Flynn) knows that he has no choice but to accept whatever decision Gwen makes about the pregnancy. However, Abigail is another story and she could go too far.

Abigail tries to coerce Chad into making Gwen get an abortion. She tells him that if Gwen has the baby, then their marriage will be over. Chad knows that this could be a possible outcome. However, he also will not manipulate a woman into terminating a baby she wants to keep. As the weeks go by, Abigail will become more desperate. In her mind, the only way to beat Gwen and save her marriage is by getting rid of the baby.

Days Of Our Lives Spoilers – Miscarriage Teased By Head Writer

Days of Our Lives spoilers reveal that Abigail might end up committing a horrendous act. Head writer Ron Carlivati told Soap Opera Digest that Gwen thinks there’s something wrong with her baby. Then, she is rushed to the hospital and it sounds like she has a miscarriage. Now, sometimes doctors are able to figure out what exactly caused the miscarriage. Not all the time, but there are times when an autopsy of the fetus is ordered. There might also be tests done, especially if Gwen suspects that her marriage was not an act of nature.

Days Of Our Lives Spoilers Next Week: Nicole Gets Vindictive, Reacts To Rafe And Ava’s Kiss #Days #DOOL #DaysOfOurLives

Days Of Our Lives Spoilers: Gabi Hernandez An Accomplice

Carlivati said that the incident will lead to tragic consequences for everyone involved. We don’t think Chad would participate in anything to harm Gwen’s child. However, Abigail would do whatever she felt was necessary, even if it were illegal and immoral.

That might be why she crashes Philip Kiriakis (Jay Kenneth Johnson) and Gabi Hernandez’s (Camila Banus) intimate moment. Could Abigail convince Gabi to help her get a drug that causes a miscarriage? Will Abigail end up slipping that in Gwen’s food or drink? If so, Miller’s maternity leave exit could be Abigail spending time in prison.