Days Of Our Lives (DOOL Spoilers Update Thursday, April 22: Abigail’s About To Lose Her Mind…Again 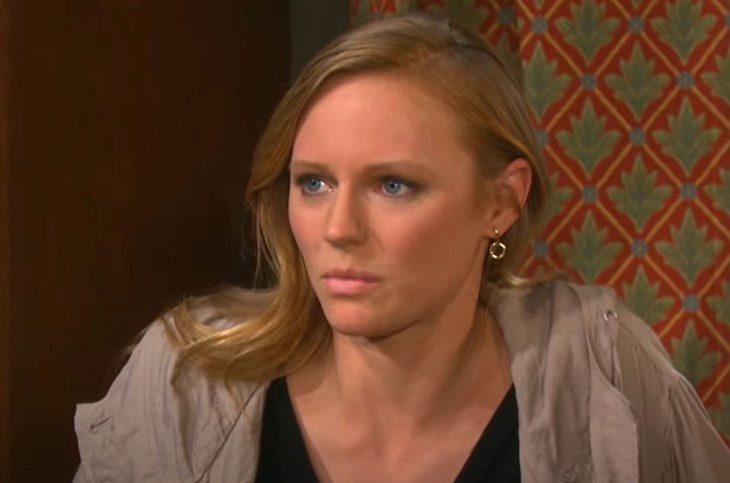 Days of Our Lives (DOOL) spoilers for Thursday, April 22, 2021, reveal Abigail unable to cope with Gwen’s pregnancy and Xander discovering he truly lucked out with his choice of new bride.

Days Of Our Lives Spoilers – Is Abigail DiMera Going Over The Edge?

Just the idea of Gwen (Emily O’Brien) carrying Chad’s child is enough for Abigail (Marci Miller) to rage and despair. This woman tried to ruin her life and even got her sent back to a mental institution after she drugged her drinks. She demanded that Gwen end the pregnancy, but a sonogram made Gwen sure she wants this baby.

Usually Abigail has her mother to turn to, but Jennifer (Cady McClain) is quite delayed taking care of Laura’s (Jaime Lyn Bauer) estate after her death. So, it’s time for Kayla (Mary Beth Evans) to be a sounding board. Sadly, Aunt Kayla is also Gwen’s doctor, so Abby might find that in the end she has nobody to turn to.

Elsewhere in the hospital, Ciara (Victoria Konefal) still wants nothing to do with Ben (Robert Scott Wilson) and everything to do with Theo (Cameron Johnson). She even kissed her childhood friend and former boyfriend. While Ben is desperate for Ciara to remember their lives together, Ciara tells Ben to get lost once again.

She is focusing on Theo and even Theo has to admit that he still has feelings for Ciara. Might the pair end up leaving town together — which means also leaving poor Ben in a lurch. After all Ben did to find her after her family gave up on her being alive, that is some slap in the face.

Chanel (Precious Way) really did think she snagged herself a rich guy when she managed to get Xander Kiriakis (Paul Telfer) into bed and get a wedding ring on his finger. But she was sadly mistaken. Xander has none of his own money and is mainly supported by his rich uncle — when he manages to stay on Uncle Vic’s (John Aniston) good side.

On Thursday, Xander learns he actually married himself a rich young woman, so while Chanel wants out of this union, Xander wants to become a devoted husband. As long as he can stay devoted to Chanel’s cash. Stay tuned to Days of Our Lives weekdays to see how these stories play out.

The Young And The Restless Spoilers Update Thursday, April 22: The Abbotts Against Ashland, Victor Shares A Secret