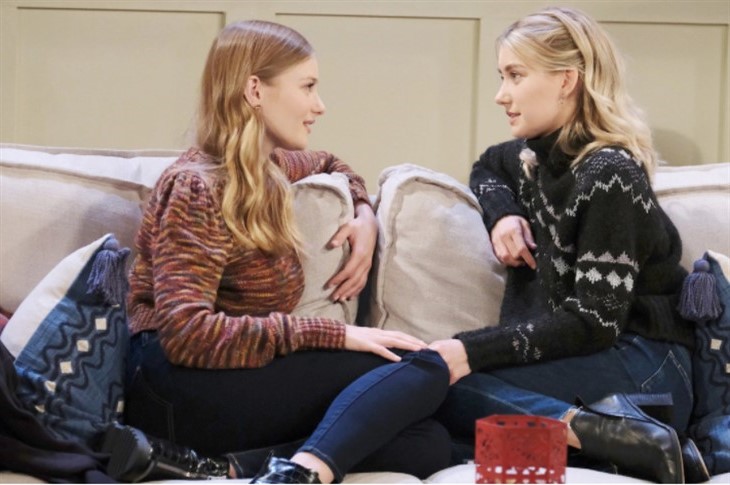 Days of Our Lives (DOOL) spoilers reveal that in Salem Gwen Rizczech (Emily O’Brien) and Claire Brady (Isabel Durant) were Bayview BFFs. When Gwen no longer needed a place to stay and Claire wasn’t useful anymore, she dumped her. Now Gwen needs an ally and reaches out to Claire. However, she has been fooled a lot lately and isn’t interested in giving Gwen a second chance.

DOOL spoilers reveal that when we first saw Gwen on-screen, she was practically Claire’s best friend while they were in Bayview. What Claire didn’t realize is that she was just being used by Gwen. It was the Salem connection that was so important. At the time, fans thought it was all about Jake DiMera (Brandon Barash). However, we now know that it was really about Abigail DiMera (Marci Miller) and Jack Deveraux (Matthew Ashford).

After Claire was released, Gwen got out of Bayview and beelined right to John Black (Drake Hogestyn) and Marlena Evans’ (Deidre Hall) place. Claire hid Gwen in her room until one day, she had some explaining to do.

Days Of Our Lives (DOOL) Spoilers Next Week: Rex Has Shocking News For Kate And Roman

Ever since then, Gwen and Claire’s friendship seems to have been forgotten about. It will be referenced again during the week of March 22. Everyone in Salem hates Gwen with the exception of Jack. Gwen isn’t his favorite person but he feels like he owes it to Gwen to try and make up for her childhood. It seems that Gwen might reach out to Claire when she suddenly remembers they were friends once. However, it’s most likely because Gwen needs something from her.

Days of Our Lives spoilers from TV Guide reveal that Gwen’s scam doesn’t work this time. Clair gives her former BFF the cold shoulder. After all, where has Gwen been all this time when Claire really needed a friend? Where was she when Claire was being used by Jan Spears (Heather Lindell)? Where was she during the Charlie Dale (Mike Manning) fiasco and everything else?

It seems that since Claire was released from Bayview, she has been fooled, tricked, and used by different people. It’s about time that she wisen up and sees people for who they really are, including Gwen. The manipulator has to know that Claire and Abigail are related. Could her “reaching out” have something to do with getting revenge on her half-sister?

Days of our Lives Spoilers: Head Writer Ron Carlivati Got 'All the Feels' After Meeting Jackée Harry #Days #DOOL #DaysOfOurLiveshttps://t.co/XYUav6M81z

What do you think is going to happen with Gwen in the near future? Are you glad that Claire won’t be falling for Gwen’s latest scheme? To find out what happens with these characters, keep watching the NBC soap.

Kelly Ripa Adds To Her Family