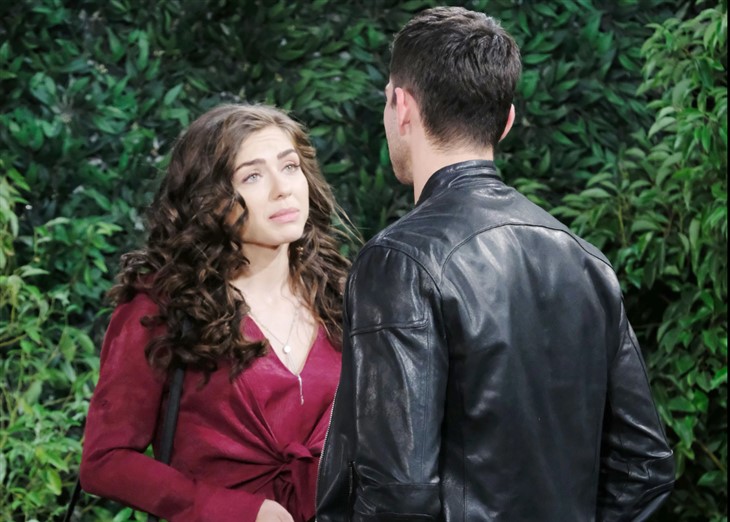 Days of Our Lives (DOOL) spoilers reveal that in Salem Ciara Brady Weston (Victoria Konefal) is found alive (for real, not a dream or hallucination). Evan Frears aka Christian Maddox (Brock Kelly) managed to kidnap Claire Brady (Isabel Durant). However, the young women are saved and “Cin” is reunited! Unfortunately, Shawn Brady (Brandon Beemer) is wounded during the rescue mission.

DOOL spoilers reveal that Ciara has been held hostage in The Glass Box for several months. She has even gone through more than one captor and right now, Evan has taken over and has a gun. He gave Ciara a newspaper article about Ben Weston’s (Robert Scott Wilson) tragic death. She believes that the newspaper is real, so Ben must be dead. However, he is very much alive. While Ben and Shawn start to close in on Shawn, Evan gets ready to murder Ben. At some point in the next week, Claire will also be kidnapped!

Ben and Shawn finally get to where Evan is holding Ciara. Now, we aren’t sure if Claire is being held hostage with Ciara, or if she’s in a different location. We are assuming the young women are together, though. During the week of March 8, Evan will finally be busted! However, he won’t just put his hands up and surrender. There will be a big battle before Ciara and Claire are rescued.

Days Of Our Lives Spoilers – Shawn Brady Wounded And Hospitalized

Days of Our Lives spoilers reveal that since Evan has a gun, the battle most likely involves a shootout. We know that Ben, Shawn, Claire, and Ciara all survive. However, Shawn does end up getting wounded. A photo published in the new issue of Soap Opera Digest shows Ben in a hospital gown. As he lays in a hospital bed looking thankful, but weary, Belle Brady (Martha Madison) is lying with him. She has a big smile on her face and is relieved that her husband survived.

Days Of Our Lives (DOOL) Spoilers: Who Killed Charlie – Will Salem Ever Know https://t.co/ZRNIdYywuH pic.twitter.com/DU9fu1Pl00

It is confirmed that next week, Ben and Ciara are finally reunited. This is real, it’s not a dream or a vision. “Cin” fans have been waiting for this moment for a long time. We’re pleased that Ciara’s story has a happy ending, but what does the future hold?

There has been no word from soap bosses or Konefal what her status is on DOOL. When she announced she would no longer be on the soap full-time, we only saw her once in a while. But now that Ciara is alive and she’s back with Ben, will Konefal be coming back as a series regular or will we only see her occasionally? That’s a question we hope to have an answer to very soon. So keep watching the NBC soap and we’ll keep you posted!