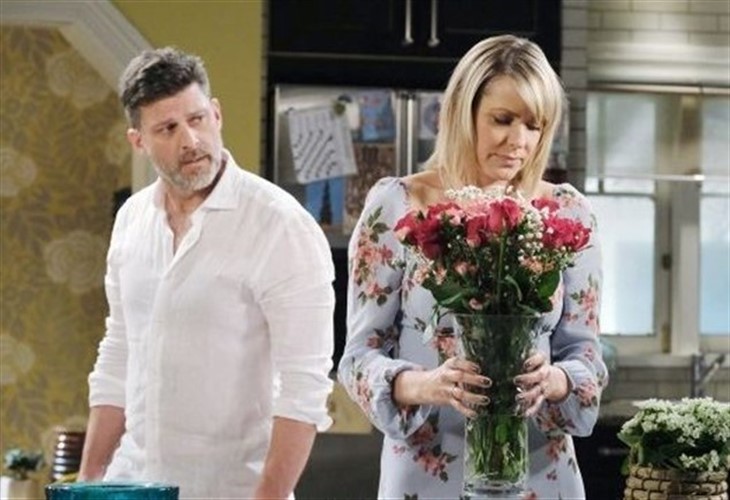 Days of Our Lives (DOOL) spoilers for Thursday, July 15, 2021, reveal in Salem Nicole on Cloud Nine now that Eric is home — but she’s on Cloud Nine feeling a whole lotta guilt.

Nicole (Arianne Zucker) can’t believe Eric (Greg Vaughan) is right there in front of her after nearly a year. This time he didn’t tell her he was coming home only to disappoint her again. Of course, that means Nicole is not mentally prepared for him to be there, but she is thrilled. The pair end up in bed as soon as possible and that’s when the guilt turns on for Nicole. The last time she slept with anyone it was with Xander, who is decidedly NOT her husband.

And now they want to have an anniversary party and Nicole thinks it can be a fresh start. However, it won’t be if Sami (Alison Sweeney) has her way. Sami is determined to ruin Nicole’s life and offers Xander (Paul Telfer) a lot of money to do so.

DOOL Spoilers – Sami Bardy’s Not Out Of The Woods

In typical Sami fashion, she doesn’t think of her own affair and how she’s just as guilty as Nicole for cheating on her own husband. One more person gets that piece of news on Thursday when Philip (Jay Kenneth Johnson) and Lucas (Bryan R. Dattilo) have a little chat and now the only person who doesn’t seem to know what Sami did with Lucas is EJ (Daniel Feuerriegel), but he’s bound to find out soon.

Days Of Our Lives Spoilers – Gwen Rizczech Is In Big Trouble

Over at the Horton House, Eli (Lamon Archey) wants to question Gwen about Dr. Snyder’s death now that his body washed up in the lake. Gwen (Emily O’Brien) has to keep her cool and come up with a host of lies right there on the spot, but it certainly wouldn’t be the first time she has had to do that. What will Gwen say and will it implicate Xander now that he thinks he’s hit literal paydirt with Sami? Perhaps Jack (Matthew Ashford) will come to her rescue before she says too much. Stay tuned to Days of Our Lives weekdays to see how this story plays out.