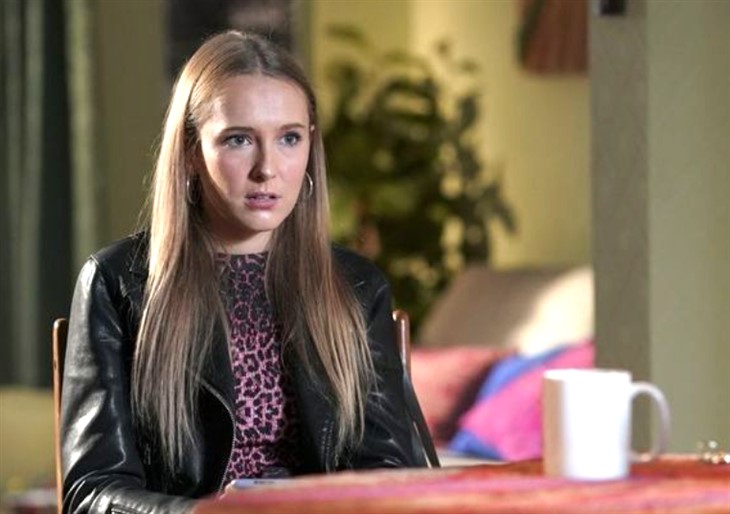 EastEnders spoilers and updates tease that Frankie Lewis (Rose Ayling-Ellis) will fear that her hit and run secret will finally be exposed. She’ll become even more concerned when she finds out that Zack Hudson (James Farrar) and Nancy Carter (Maddy Hill) are growing closer together.

Fans may recall that Frankie accidentally ran over her half-sister, Nancy, during a disastrous driving lesson with Zack, who was drunk at that time. The pair were horrified to find Nancy lying unconscious in the road. So, Zack made a horrifying decision to cover it up.

Zack moved his car and claimed that he found Nancy unconscious in the street when questioned by the authorities. He also hid the fact that Frankie accidentally hit Nancy and that he was in the car with her, teaching her how to drive, when the accident happened. Since then, Frankie has been feeling guilty about what happened and wants to tell her family the truth.

In upcoming scenes, Nancy will be released from the hospital and move back home. Linda Carter (Kellie Bright) grows concerned with Nancy because she hasn’t been in good spirits ever since she got discharged from the hospital. Linda tells Sharon Watts (Letitia Dean) about it and Zack offers to help cheer Nancy up.

Zack comes up with a plan and prepares a fabulous dinner for Nancy with a twist. He’ll present her meal wearing only a hat and an apron. Frankie gets confused when she learns about what Zack has been doing. She’ll confront him about it and remind him that they agreed to stay away from Nancy.

In an interview with Digital Spy, James Farrar opened up about Zack’s potential love triangle with Nancy and Frankie.

“Frankie is his second option but his true feelings will be shown after the car crash,” he said.

“It’s been Nancy from day one. I’m looking forward to the next couple of weeks – it’s massive what happens,” he hinted.

He added that the accident will give Zack the opportunity to show how much he cares for Nancy. Frankie may have misread Zack’s intention but his heart definitely belongs to someone else. He wants to protect Frankie and thinks that he can keep the crash a secret. But with soap operas, nothing stays a secret for long.

How will Nancy react when she finds out that Zack and Frankie had something to do with the crash? How will it affect her relationship with Zack? Will Frankie be able to accept that it’s Nancy that Zack wants and not her?

The Young And The Restless (Y&R) Spoilers: Will Phyllis Bring Down Tara Locke – Sharon Surprised