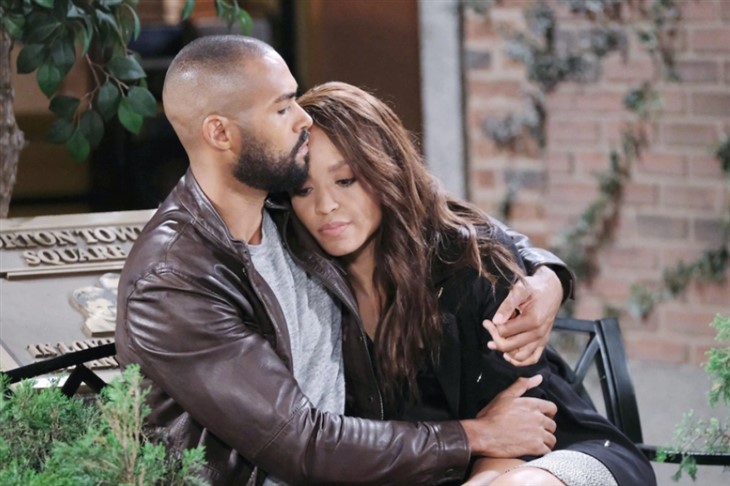 Days of Our Lives spoilers reveal that Eli Grant (Lamon Archey) and Lani Price Grant (Sal Stowers) will celebrate their one-year wedding anniversary in July. On the same day as their party, Paulina Price (Jackée Harry) will have her deceptive plans exposed. The two events end up colliding and it not only causes big issues with “Elani”, but with the entire town of Salem.

Days Of Our Lives Spoilers Next Month: – ‘Elani’ Wedding Anniversary

DOOL spoilers reveal that in July, Eli and Lani will celebrate their one-year wedding anniversary. They have been through a lot of difficult storylines since they first became a couple. Even though it seemed as if they wouldn’t make it, “Elani” was brought back together again. They got married and had twin babies. After the kidnapping story was resolved, things between the couple seem to be going well.

While Chanel Dupree (Precious Way) is a bit of an issue for the pair, that will be small potatoes compared to what happens with Paulina.

Before Harry’s big debut as Paulina, the actress teased that the Miami real estate mogul is full of scandals and secrets. We have to wonder what some of those are. In the summer promo, she answers the door and it’s clear she wasn’t expecting the person on the other side. So, that is one bombshell to expect. Another has to do with her deceiving Abe Carver (James Reynolds) and everyone else about Horton Square.

Days of Our Lives spoilers reveal that head writer Ron Carlivai teased what to expect with Soap Opera Digest. The scribe told the magazine that Paulina pitched a certain idea to Abe, which he was on board with. However, her real plans are a bit different.

“Paulina sells this plan to Abe, which in theory, is wonderful. It’s supposed to be an incentive for small businesses run of people of color to make Horton Town Square more diverse. But we see that what she’s been selling is not exactly the same as what she’s planning, and her plans are going to be at odds with the feelings she’s developing for everyone in town, especially Lani and Abe.”

It is interesting that Eli and Lani’s wedding anniversary celebration will be on the same day as Paulina’s groundbreaking ceremony. Considering that Paulina and Lani are family and seem to have a bond, we would have assumed they would all celebrate together. We also have to wonder what will be so upsetting to Eli and Lani, as well as the entire town of Salem.

Perhaps these businesses are going to the highest bidder and won’t have anything to do with diversity? Or maybe Paulina plans on erasing Tom Horton (Macdonald Carey) and Alice Horton’s (Frances Reid) legacy. What do you think Paulina is really up to and how will it negatively affect Salem?