Days Of Our Lives (DOOL) Spoilers: Claire Figures Jan Spears Has Been Awake For Weeks And Killed Charlie Tate! 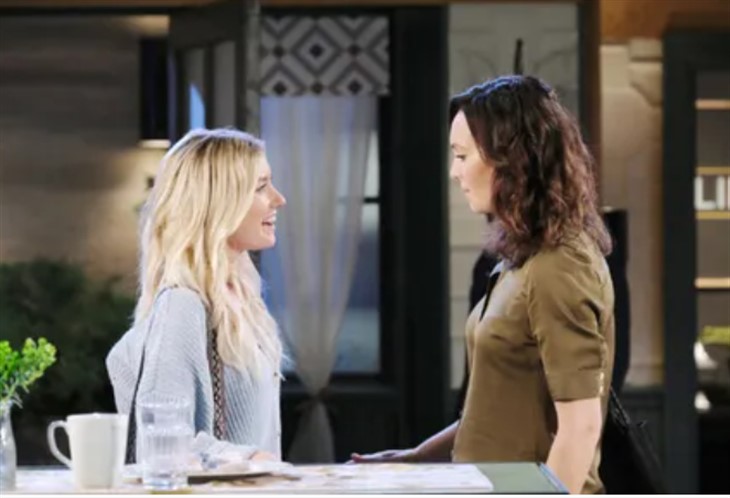 Days of Our Lives (DOOL) spoilers tease that Jan Spears (Heather Lindell) thinks she finally has a foolproof plan to get rid of Belle Black (Martha Madison) so she can have Belle’s husband, Shawn Brady (Brandon Beemer) all to herself. As viewers remember, Jan kidnapped Belle on Belle and Shawn’s wedding day. She put on Belle’s dress, including the veil, and when she finally revealed herself John Black (Drake Hogestyn) strangled Jan. Jan didn’t die but was in a coma. But she wasn’t as comatose as everyone believed. She awoke much sooner and concocted a plan!

Days Of Our Lives Spoilers – Jan Spears Believes That Her Plan Is Perfect!

Knowing how much Belle was angry with Charlie Dale (Mike Manning) for not only raping Allie Horton (Lindsay Arnold) but also threatening Belle’s daughter Claire Brady (Isabel Durant). So Jan stole Belle’s red coat and went to Charlie’s apartment and shot him dead. Furthering her plan along, John also showed up at Charlie’s and witnessed the murder. He didn’t see the killer’s face but he recognized Belle’s coat. To complete the frame, Jan left a button from the coat at the murder scene, knowing the police would find it. Jan went back to the hospital and pretended to still be in a coma. Weeks went by, and the police went through many suspects until Rafe Hernandez (Galen Gering) noticed Belle’s coat was missing a button just like the one found on the scene.

DOOL Spoilers – Jan Spears Will Slip Up Sooner Rather Than Later!

Although it seems as if her plan is working, Jan will surely slip soon. She’s been working overtime to get Claire on her side. She will most likely make a comment that will make Claire believe that Jan has been awake longer than anyone knows and if that’s the case, then she probably killed Charlie just to frame Belle. But getting evidence or a confession won’t be easy. Besides, Claire should have learned her lesson about doing this alone, since the last time when she got Charlie’s confession, he found out and almost hurt her. So this time she will get help!

Days Of Our Lives – Ben Weston Needs Something To Take His Mind Off Ciara Brady!

Claire will enlist Ben Weston (Robert Scott Wilson) to help her. Ben is having a difficult time accepting that Ciara Brady (Victoria Konefal) doesn’t remember him or the love they shared. To make matters worse, Ciara has left Salem to go to South Africa, to get away from Ben. Ben won’t want to get involved, but he’ll soon decide he can’t let Claire take on Jan alone. She’s dangerous. So it shouldn’t be long before Ben and Claire set a trap for Jan. But will Jan fall for it?

What do you think will happen next? Will Jan succeed with her plan to frame Belle? Or will she slip up and give herself away? Can Claire and Ben get the evidence they need to exonerate Belle? Dangerous plans are always being concocted in Salem, so stay tuned to Days of Our Lives, airing weekdays on NBC. And don’t forget to check back right here regularly for all your Days of Our Lives news, information and spoilers!