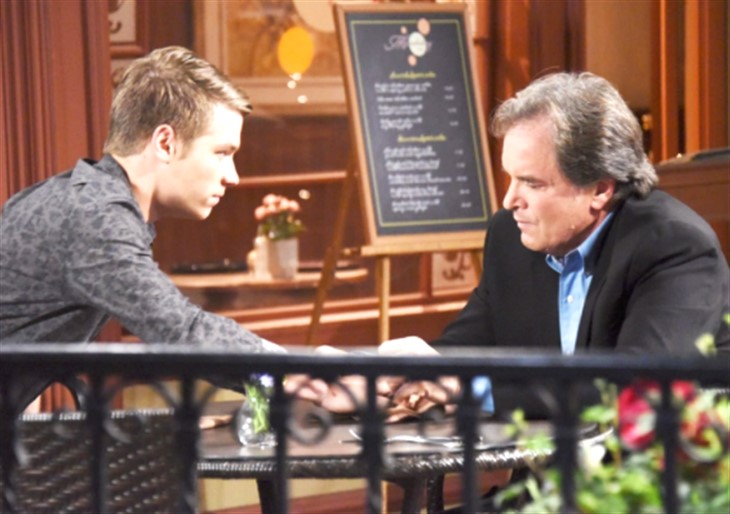 Days of our Lives (DOOL) coming and goings reveal that in Salem a smooth criminal is coming back to Salem. Soap Opera Digest reports that Angelo Tiffe is reprising his role as bad boy mob guy Angelo Vitali. Angelo is the cousin of Ava Vitali (Tamara Braun) and her son Tripp Dalton (Lucas Adams).

Angelo debuted in March of 2008 and we last saw the conniving cousin in town in August 2017. At that time he was instrumental in getting Tripp to get revenge on Kayla Johnson (Mary Beth Evans) for Ava’s death. Of course that death was a fake one as Ava also is back large and in charge in Horton Square, although a bit tied up at the moment.

Angelo kept working Tripp until he heeded his advice. At the time he acted on Angelo’s influence by trying to smother Kayla with a pillow. Kayla woke up and stopped him but Tripp then got his hands on a a scalpel and was about to do the deed when Joey Johnson (James Lastovic) appeared and admitted he was the one killed Ava. Apparently Tripp was willing to kill his stepmom but not his brother.

Days Of Our Lives (DOOL) Spoilers Next Week: Charlie Drugs Ava, Threatens To Put Her In Mental Asylum

Ava has another son, Charlie Dale (Mike Manning). He’s a bit rougher around the edges than Tripp who eventually made up with Kayla. Charlie seems like a choir boy with his goggle glasses on but in reality he is a demon seed, just like his mom. How does mobster Angelo fit into the current scenario?

Does he know about Charlie? Is it Tripp who brings Angelo to town for help in locating Ava?

It seems difficult to imagine that Charlie can be redeemed for kidnapping his mom and raping Allie Horton (Lindsay Arnold). But there is a tried and true soap trope for ultra bad characters: DID. Does Charlie have Dissociative Identity Disorder? He is meek and mild as Charlie the Intern and then veers into the dark side by kidnapping his mom and attacking Allie. If Charlie stays on the canvas he will have to be redeemed in some way.

Or maybe has a brain tumor causing his evil behavior? Then again, Charlie could be killed off.

Royal Family News: The Queen Tweets Out a Message For A ‘Happy And Healthy New Year’