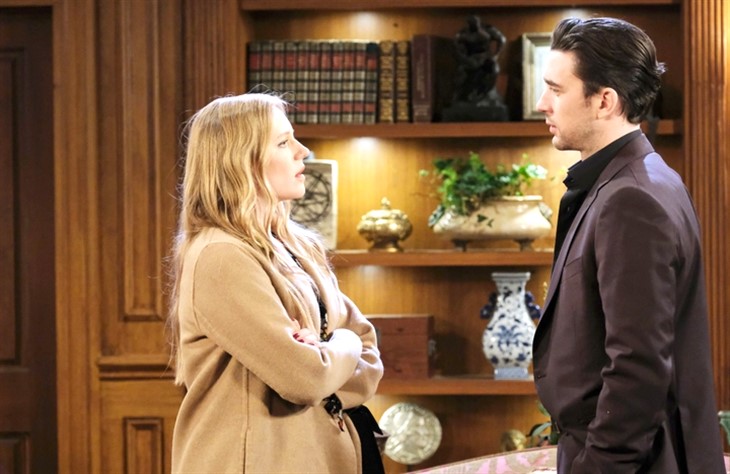 Days of Our Lives (DOOL) spoilers for Monday, September 13, 2021, reveal in Salem Chad DiMera getting back to his real life and deciding it’s time to get his wife back.

Chad’s (Billy Flynn) trip to Arizona to see Sonny (Zach Tinker) and Will (Chandler Massey) and his time as a drag queen has apparently come to a close as Chad decides he needs to take charge of his life after wallowing in self-pity for months on end.

EJ’s (Daniel Feuerriegel) talk must have done him a world of good because Chad makes it his business to try to get Abigail (Marci Miller) to finally forgive him and come home so they could give their marriage another go. But is Abby ready to do that yet? Chad did show that he refuses to trust her no matter how much he’s worked to improve her mental health. She may not be able to just pick up where they left off no matter how much she wants to.

Johnny DiMera (Carson Boatman) is also begging — for someone, anyone to fund his film. Will Grandma Marlena (Deidre Hall) come through for him now that she’s apparently back from her adventure in Zurich where she was busy saving the world.

Johnny’s dad, EJ DiMera, also has some problems when he and Xander (Paul Telfer) go at it. What begins as a verbal argument turns into a physical fight. These two should probably never try to be business partners again because nothing seems to work out.

Days Of Our Lives Spoilers – Will Julie Williams Accept The Truth?

Doug (Bill Hayes) continues to act odd, calling people by the wrong name and not remembering how a conversation began. He also keeps disappearing and Jack (Matthew Ashford) has been trying to convince Julie (Susan Seaforth Hayes) that there may be something wrong. Perhaps Doug should see a doctor.

Julie just can’t accept that anything is wrong with Doug, the love of her life and the man she’s been married to for decades. Perhaps this should be a moment for Hope (Kristian Alfonso) to return to talk some sense into her stepmother/half-sister. Something is definitely going on with Doug and Julie is going to need to face it somehow. Stay tuned to Days of Our Lives weekdays to see how these stories play out.