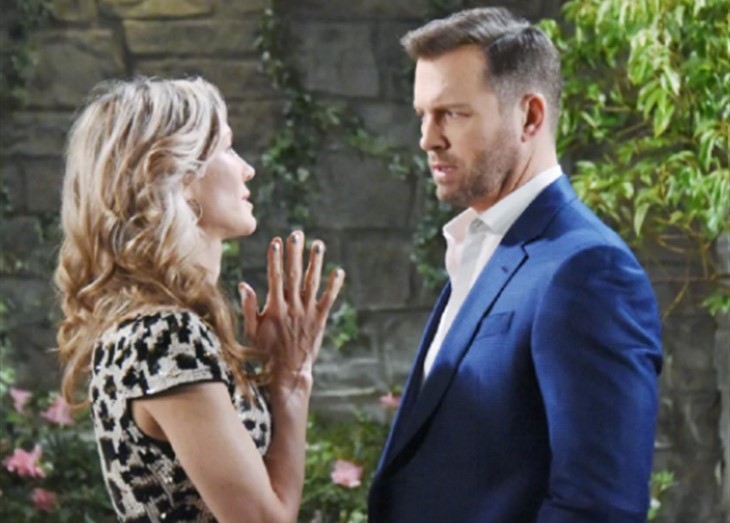 Days of Our Lives (DOOL) spoilers tease that Brady Black (Eric Martsolf) and Kristen DiMera (Stacy Haiduk) will find themselves at a crossroads in an upcoming episode of Days of Our Lives. Brady has finally had enough of Kristen’s stunts and he dumps her!

Days of Our Lives viewers will recall that Kristen tried to hire Xander Kiriakis (Paul Telfer) to dispose of Lucas Horton (Bryan Datillo) and Sami DiMera (Alison Sweeney), who she had locked in the wine cellar in the DiMera mansion. Lucas tells Brady that Kristen almost had him and Sami killed, and it was only Sami outbidding Kristen for Xander’s fee that saved them. Brady wasn’t completely surprised, considering as Days of Our Lives viewers know, Kristen is a DiMera even if by adoption, not blood. Longtime Days of Our Lives viewers will recall that DiMera villains all tend to go back to their former wicked ways, even though most of them have soft sides, some softer than others.

Those not raised by Stefano DiMera (Joseph Mascolo) tend to be a little less cruel, such as Chad DiMera (Billy Flynn) and Stefan and Jake DiMera (Brandon Barash, Brandon Barash) although Stefan and Chad both can be ruthless in business. Tony DiMera (Thaao Penghlis) also has that softer side. Brady had really believed that Kristen had changed and had tried to change, and having their baby Rachel Black (Miller, Kate, and Emma Kamienski) had changed her. However, when he realizes she has not changed and hears what she has done, especially when he finds out Chloe Lane (Nadia Bjorlin) is missing, he’s had enough! Chloe cannot be found anywhere and he fears that Kristen again went off the deep end and killed her!

Days of Our Lives viewers will recall that Brady has been more than patient with Kristen. He tells Kristen that things are no longer going to work between them, and he can no longer trust her. He tells a tearful Kristen that he loves her, but he doesn’t love what she does. Brady says he cannot raise Rachel with someone he doesn’t trust, and especially someone who goes insane and off the rails with the least little provocation! Days of Our Lives viewers will recall that Kristen doesn’t trust Brady either, and when a couple doesn’t trust each other, the relationship is dead at the roots even if attachments are there.

Brady has tried very hard with Kristen, but this last time was simply just too much. Kristen had been deceiving Brady right under his nose disguised as Susan Banks (Stacy Haiduk) for months! Brady also knows what Kristen did to Kate Roberts (Lauren Koslow) as he has heard from both Philip Kiriakis (Jay Kenneth Johnson) and Lucas, and also knows that Kristen disguised herself as Kate as well! Kristen tries to get Brady to change his mind but it is just too late – there has been much too much water under the bridge, and too many people that Kristen has tried to kill since she’s been out of Statesville! Kristen is very afraid that not only has she lost Brady forever, but she’s also lost Rachel too!