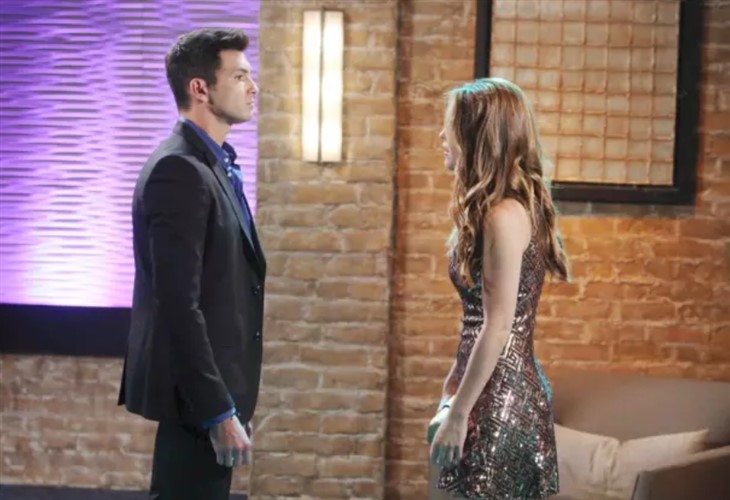 Days of Our Lives spoilers tease that Ben Weston (Robert Scott Wilson) will receive a visit from his dead sister Jordan Ridgeway (Chrishell Stause) in an upcoming episode of Days of Our Lives. Could Ben be hallucinating, having a nightmare, or could Dr. Wilhelm Rolf (William Utay) be involved?

Days of Our Lives viewers will remember that Ben just went through months of emotional torture in which he tried to find and rescue his bride, Ciara Weston (Victoria Konefal) only to have her send him divorce papers when she got amnesia and didn’t remember him or their love story. Days of Our Lives viewers will also remember that his sister Jordan was killed by Evan Frears aka Christian Maddox (Brock Kelly), and Ben was blamed for the murder. However, Evan showed up again after having been in Bayview when his father, Milo Harp aka Orpheus (George Del Hoyo) approached Dr. Marlena Evans (Deidre Hall) to get Evan out of Bayview so they could leave town together. However, Evan knocked his father out and got away!

More recently, Days of Our Lives viewers will recall that Evan was involved with Ciara’s captivity when he killed Allan Rhodes, (Jason Downs) who had been Vincent Belman’s (Michael Teh) pilot. Rhodes had been the one who had kept Ciara in a glass-enclosed bedroom all those months, and when Evan found out Ciara was alive from Orpheus he killed Rhodes and took over. He had intended to kill Ben but found Claire Brady (Isabel Durant) instead. Evan took Claire hostage for a short time but Ben rescued her and forced Evan to take him to Ciara. Evan was later taken into custody.

Days of Our Lives spoilers tease that Ben Weston will receive a strange visit from an unexpected visitor in an upcoming episode of Days of Our Lives. His strange visitor turns out to be his dead sister Jordan! Is Ben hallucinating, or having a nightmare, or is Dr. Wilhelm Rolf (William Utay) involved? Jordan was definitely dead when Ben found her strangled in his cabin! With the emotional trauma Ben has been through in the past several months, it would surprise no one if he started having nightmares! Ben is a pretty strong person so it’s doubtful that he would have a nervous breakdown and start to hallucinate. But what if Jordan is alive? How could she be, and why would she show up to Ben now if she were?

Days of Our Lives viewers will recall that one of the last times Orpheus made a jailbreak was with Rolf and Ben’s father, Clyde Weston (James Read). So Orpheus and Rolf would have a connection – there is a possibility that Orpheus had been working on getting all of Evan’s prison charges dropped, at least up until he murdered Rhodes. Rolf could have resurrected Jordan to that end, and she could have been recovering until now. On the other hand, perhaps there is someone in Salem who would have a reason to gaslight Ben by haunting him with his dead sister! After all, there are those in Salem who are very skilled at impersonating others and even have the masks to do it – again, thank you, Dr. Rolf!

Stay tuned to Days of Our Lives, and keep checking Days Of Our Lives spoilers frequently for all the latest news, updates, and developments!