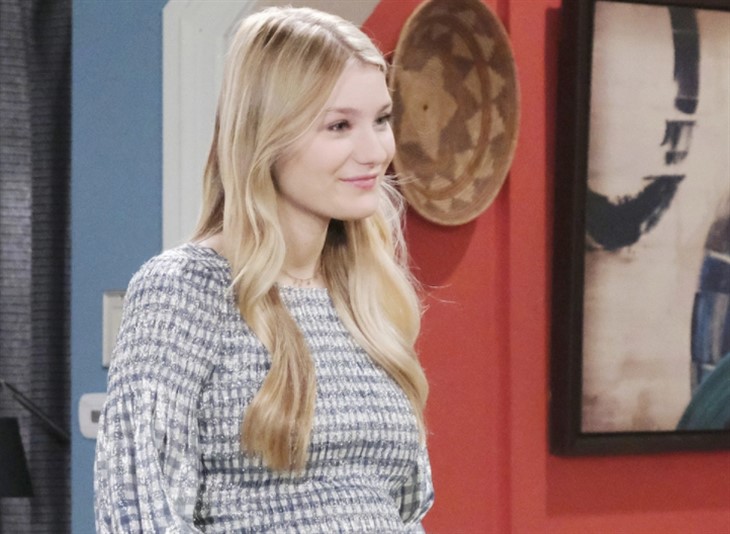 Days of Our Lives (DOOL) spoilers tease that Ava Vitali (Tamara Braun) will fall in love with her grandson Henry Horton (Jayna and Kinsley Fox) when Allie Horton (Lindsay Arnold brings him to meet his paternal grandma for the first time in an upcoming episode of Days of Our Lives!

Days of Our Lives viewers will remember from recent episodes that Tripp Dalton (Lucas Adams) helped Allie with baby Henry recently and told his dad, Steve Johnson (Stephen Nichols) that he wanted to be there for his little nephew. Being there is even more important now since the child’s father is dead! Neither Allie nor Tripp wanted Charlie Dale (Mike C. Manning) anywhere near Henry anyway, and he was threatening to try and take Henry before someone took him out.

He may talk to Allie about his mother being involved in Henry’s life or at least meeting him. Allie really has no fault to find with Ava either, since if it weren’t for her she would have made a grave mistake when she was holding a gun on Tripp! Allie will agree that Henry should know his paternal grandma and Ava should know Henry too. So, Tripp and Allie talk it over and decide Tripp should be the one to contact Ava and ask her when a good time is to come over and visit.

They decide to make Henry a surprise, so Tripp doesn’t tell her that anyone besides him is coming over. Ava is still staying at Rafe Hernandez’ (Galen Gering) house, so he may or may not be there when they arrive; it depends on if he has to work or not. Rafe would love to hold Henry and play with him also, since if he’d stayed married to Sami DiMera (Alison Sweeney) Henry would have been his step-grandson!

Days of Our Lives viewers will have noticed that after Ava found out that Charlie had been killed, all of a sudden she had a photo of her holding him as a baby. She looked at it mournfully when no one was looking. She knew she had made many mistakes and wished she could have gone back and done things differently, but now it was too late – actually, it had been too late for many years.

She should have accepted and loved him when he was still young and innocent and he may not have turned out the way that he did. So, when Tripp arrives with Allie and Henry in tow and she gets to meet her grandson for the first time, she’ll wish she could fix her mistakes with Charlie through his son, but she knows that is not possible. But she will fall in love with his son like she didn’t let herself with Charlie as a baby. She may not be able to get a fresh start with Charlie through Henry, but she will certainly realize she can do things right from the beginning with this new grandson and her other son, his uncle as well.