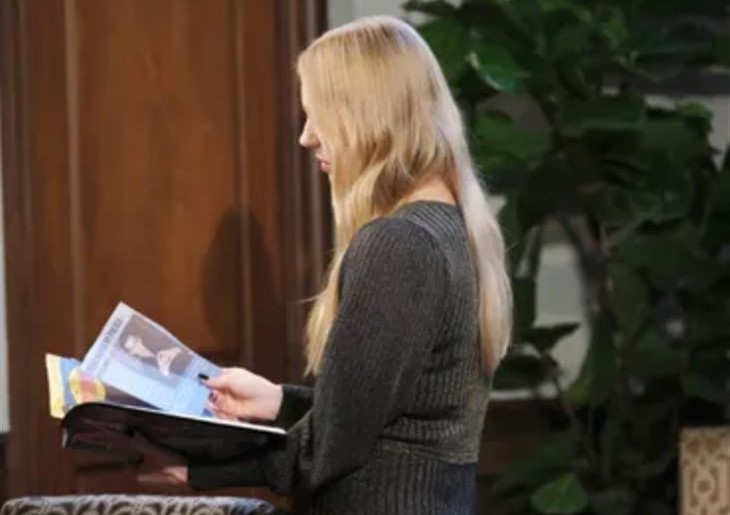 Days of Our Lives (DOOL) spoilers tease that in Salem Abigail Deveraux (Marci Miller) and her parents will compare notes on Gwen Rizchech (Emily O’Brien) this week on Days of Our Lives; and they will start to solve the puzzle!

Days of Our Lives viewers will recall that Gwen has been collecting newspaper clippings and other information on the Deveraux family for a long time. As Jack Deveraux (Matthew Ashford) looked through the folder of clippings that Abigail and Anna DiMera (Leann Hunley) found in Gwen’s room he saw some that went back years! Longtime Days of Our Lives viewers will recall that Jack didn’t know he was a brother to Steve Johnson (Stephen Nichols) and Adrienne Johnson Kiriakis (Judi Evans) until long after he became a young adult.

He had come to Salem in search of a cure for Hodgkins’ Disease and Jennifer had found out he was adopted. Even though Jack doesn’t want to give Gwen any “outs”, he admits she could have wondered if she was related to the Deverauxs. Jack’s adoptive family was very wealthy, and in politics. His adoptive father, Harper Deveraux (Joseph Campanella) was a wealthy state senator married to a woman named Anjelica Deveraux (Judith Chapman).

Jack makes a point that it would be unusual, to say the least, for a person to research a family and all its members back as many years as Gwen had collected clippings from for the purposes of investigating potential employers. To Jack, it sounds like she could have been researching for a potential genealogy. However, he also muses that it would have been much easier for her to simply obtain a toothbrush or some hair and have DNA tested and compared!

Jennifer and Abigail listen to Jack’s theories, and then they weigh in. Abigail mentions that Anna thought that Gwen was a golddigger trying to get into Chad DiMera’s (Billy Flynn) business and life looking for a rich husband. Jennifer notes that it was Gwen who found the letter that almost broke her and Jack up for good, and had egged Abigail on about going into Kate Roberts’ (Lauren Koslow) room supposedly to borrow a pair of shoes! Gwen had conveniently found this box of letters and conveniently knocked it over on the floor so Abigail would conveniently pick up and read the letter from Jack to Kate! Abigail starts talking about Gwen’s trying to convince Chad that she was cheating on him with Jake DiMera (Brandon Barash) and the three of them see a pattern emerge.

Gwen was with Jake at first, and he certainly wasn’t wealthy as Jake Lambert – but could Gwen have known he was Stefan O. DiMera’s (Brandon Barash) twin, and targeted him also for the reasons of marrying money? They discuss Gwen’s working hard to break up Chad and Abigail and Jack and Jennifer, and even though Gwen has never given Jack the impression she wanted to get with him, maybe he was a backup in case she couldn’t get with Chad! The more they talk about her involvements and actions amongst themselves, the closer the Deverauxs become to solving the puzzle!