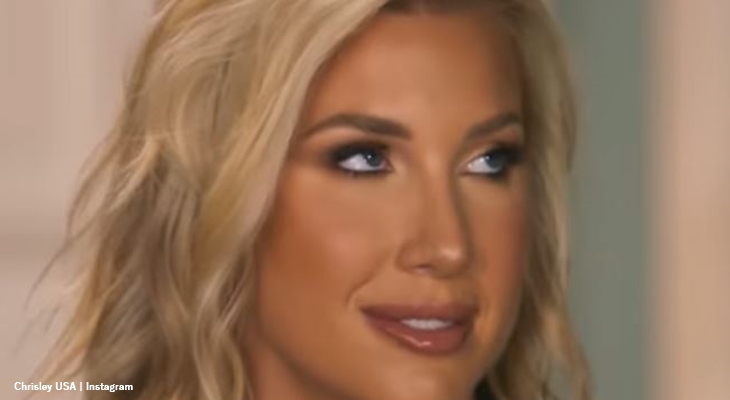 Chrisley Knows Best fans know that Savannah is usually the “good” kid in the family as far as Todd is concerned. However, some critics think that she’s just spoiled. Well, this week, USA Network revealed that Savannah has her cake and she intends to eat it…her way. The rest of the family doesn’t really seem to matter to her. Even Grayson seemed a bit shocked by his sister’s behavior.

Despite some accusations that she’s spoiled silly by her wealthy dad, many fans just totally adore her. Savannah’s beautiful they think, and many folks are obsessed by that. Back in July this year, she wore a peach-colored outfit that got fas raving about her sense of style. One of them wrote, “What is the brand of your outfit. 😍obsessed.” Meanwhile, another smitten follower wrote, “Wish I was the sun. I would be kissing you all the time 😋🔥🔥🔥❤️.” Well, she works hard for what she achieves and spends a lot of time promoting her Sassy By Savannah cosmetics line. Clearly, her dad Todd seems immensely proud of his daughter.

Chrisley Knows Best fans literally slavered over her birthday photo this year. USA Network Fans really liked her appearance as she wore a black shirt which was trimmed down into her slim waist. Additionally, she sported torn denim pants and her long hair looked very nice and contrasted against her tan. A watch, a wristband, and some simple chains complemented her casual but elegant look, which got fans raving. Actually, her dad also shared some complimentary feelings on her birthday. Clearly, she can do little wrong as far as he’s concerned. But, Grayson isn’t so besotted and he complained about her with the cake.

In a teaser for the show, USA Chrisley revealed that the family enjoyed some cake. Well, Savannah kept eating the cake from the table and then licking her fingers. Then, she’d pluck another piece of cake, and keep on eating it. Grayson seemed shocked about it. So, he asked his older sister if she was raised “in a barn?”  Actually, for once, Todd also seemed appalled by his daughter’s behavior. For Todd to criticize her, clearly she offended his sense of hygiene. Meanwhile her mom, Julie seemed unfazed by it. Todd let her have it and told her to “stop.” After all, she was licking her fingers and then putting her hands “all over something” other people would eat.

Chrisley Knows Best fans saw that savannah shrugged her shoulders. Actually, she seemed completely unworried about how the rest of the family felt. Clearly, she wanted her cake and she was gonna eat it her way. As for the rest of them? Well, too bad. Fans took to the comments it discuss her behavior. But, a lot of them simply thought it was hilarious. One fan wrote, “Savannah getting her cake on 🥮.” Then another one obviously loves the scene, writing, “I love it !!! Lol.”

Eating The Cake Her Way Loses No Shine For Savannah

Chrisley Knows Best fans simply can’t see that Savannah might do anything wrong. In fact, one fan seemed to admire her, writing, “That’s why she did cause she smart like that 😂😂😂😂.” Well, probably folks just laugh at it as the show is a comedy after all. While it’s a reality TV show, fans also know that a lot of it is carefully rehearsed. So, they don’t take it too seriously at all.

Be sure to catch up on everything happening with the USANetwork right now. Come back here often for more  Chrisley Knows Best spoilers, news, and updates.