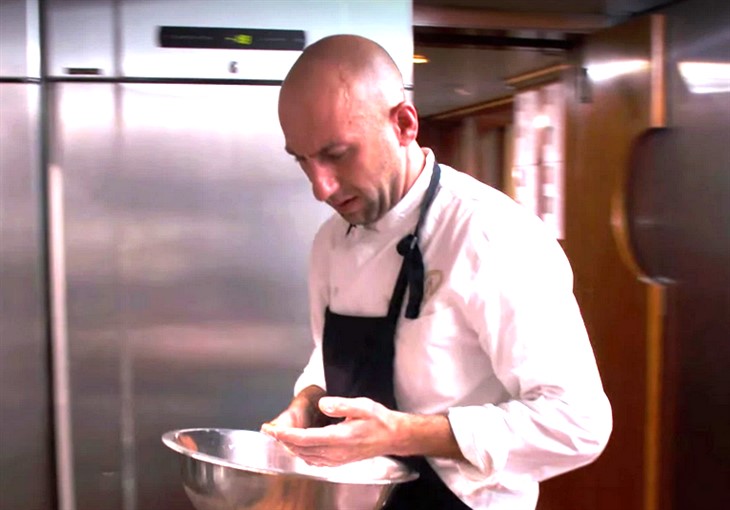 During this season of Below Deck Mediterranean guests on the boat have been impressed with Chef Mathew Shea’s culinary creations.

A fan, however, brought up something that always seems to be missing.

During a September 29 Ask Me Anything session on Instagram a fan asked a thoughtful question, writing, “Why isn’t there any bread service for dinner on the yacht?”

He added that he has never seen it on any of the seasons of Below Deck Mediterranean.

The chef seemed eager to answer the specific question and more when he responded, saying, “There is usually a bread service.”

However, he added, “they don’t seem to show that or most of my dessert” on the show.

To be fair, there were two remarkable desserts that viewers actually did get to see on Below Deck Mediterranean.

On an August 9 episode of the show, the chef made cakes for a guest celebration and asked stew Courtney Veal to help him in decorating them.  Courtney ended up saying that one of the cakes looked like “someone’s just made it for an 8-year-old’s birthday.”

Though the guests were a bit confounded by the appearance of the cakes it became clear that their taste made up for the confusion.

Those cakes might have caused the chef some consternation but on another occasion, there was a different feeling when his dessert became a season highlighter for him.

On a September 20 episode, Matt described the fun he had “baking a cake with [Roy Orbison III]”

Fans may remember that Chef Mathew Shea isn’t your everyday average chef.  In fact, Mathew Shea is the son of well-known actor Patrick Shea who was featured in the movie Gone Baby Gone, among others, and his mother is also a chef who Mathew credits for giving him his love for the culinary arts.

With all that talent involved in raising the chef, it seems only natural that he would be incredible at his job.

Below Deck Mediterranean Spoilers – He certainly has a lot to live up to.

It has not always been great for the reality TV star on Below Deck Mediterranean as he once almost left the boat as other crew members had rudely asked him to “stop talking” to which he responded saying, “I’ve worked too hard to get sh_t for being myself.”

Fans who want more Below Deck Mediterranean can catch Season 6 of the show on Mondays at 8 PM Central on Bravo and those who cannot wait can get early access to new episodes on Peacock.