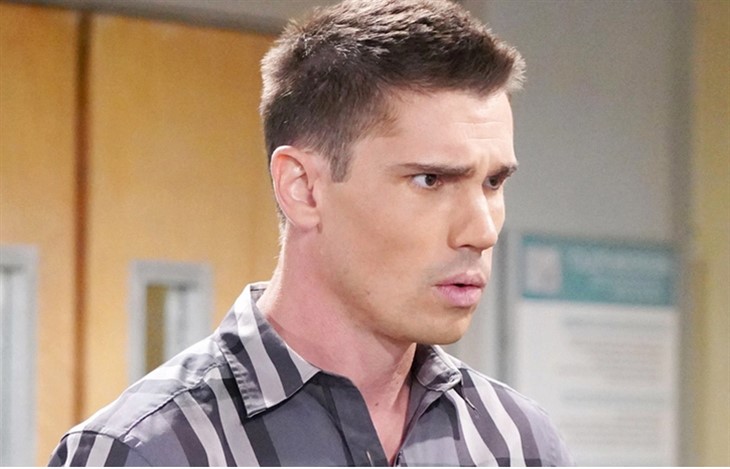 The Bold and the Beautiful spoilers document that John Finn Finnegan (Tanner Novlan) stunned Sheila Carter (Kimberlin Brown). He appeared conflicted but was not, as Steffy Forrester’s (Jacqueline MacInnes Wood) hopes were affirmed.

Finn’s tell to his biological mother is not an ending to this storyline. No, Sheila will not walk away. Add to that her bitter feelings for the Forrester family and this battle has just begun. But where it goes next is a compelling question.

The Bold And The Beautiful Spoilers – Head-Fake Accomplished Momentary Victory

It appeared as though Sheila got through to Finn. He seemed to believe that his birth mother collapsed because of some health issue.

However, the test results were what Steffy expected. As she, Sheila, and Finn heard, the all-clear sign was given.

Sheila’s release from the hospital served to cut off contact, rather than serve as an opening for it. Finn told her that she could not have a connection with him or Hayes Forrester Finnegan (Samantha Worden and Piper Harriet) because of how his wife and the Forrester’s feel about her.

If bad blood is all that existed, then Finn probably would have told Steffy and Sheila that they had to get along with each other. But Sheila shot Stephanie Forrester (Susan Flannery) and Taylor Hayes (Hunter Tylo) in the past. So Finn knows that his mother is an unstable threat.

Sheila is the one person who can cause Steffy and Brooke Logan Forrester (Katherine Kelly Lang) to stand united. Brooke was shot by Sheila as well. Brown’s character has also committed a series of other crimes and heinous acts over time.

So, Sheila’s claim that she is not a bad person represents words instead of a statement that can be backed with facts or even circumstantial evidence of a redemption course being plausibly pursued.

The Bold And The Beautiful Spoilers – Steffy Forrester Finnegan At Last?

The next step that Steffy must take is to file Sinn’s marriage documents. She has delayed doing so until now for reasons that were directly related to Sheila.

Finn demonstrated where his loyalties lie. Through his actions and words, Novlan’s alter ego has proven that the family he formed with Steffy, which includes Hayes, comes first.

Steffy can officially add Finnegan to her last name. But longtime B&B fans know that formality will not prevent Sheila from trying to insinuate herself into Finn and Hayes’ lives using any means necessary.