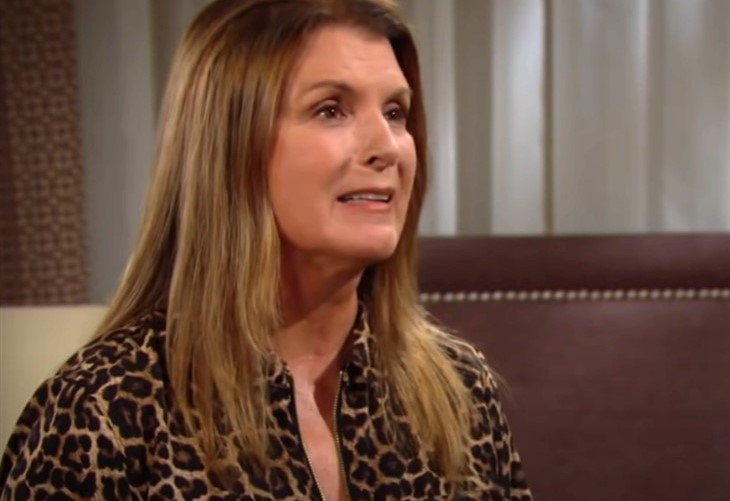 The Bold and the Beautiful spoilers reveal that Sheila Carter (Kimberlin Brown) gets a Christmas miracle. After being pushed by Taylor Hayes (Krista Allen), Steffy Forrester Finnegan (Jacqueline MacInnes Wood) agrees to invite Sheila over for Christmas. It is teased that Sheila is grateful for Taylor’s help, but will Steffy regret this decision?

The Bold And The Beautiful Spoilers – Sheila Carter’s Jealousy

B&B spoilers reveal that Sheila is determined to connect with John “Finn” Finnegan (Tanner Novlan) and Hayes Forrester Finnegan. However, Deacon Sharpe (Sean Kanan) is making a lot more progress than Sheila. Deacon seems to be succeeding immediately, too, which only frustrates Sheila even more. Despite Sheila’s jealousy, she will learn that Taylor is back in town and could come up with a new plan.

Sheila has done a lot to Steffy and the entire Forrester family. What happened to Taylor is one of the reasons Steffy gives to Finn as to why he can’t have a relationship with his birth mother. Knowing this, Sheila might come to the conclusion that there is only one person that can change Steffy’s mind… her mother. However, what will Sheila say to Taylor when they face each other?

The Bold And The Beautiful Spoilers – John Finnegan Adds Pressure

The Bold and the Beautiful spoilers reveal that Finn is finding himself drawn to Sheila once again. Finn knows how strongly Steffy feels about the situation. However, Finn also believes that he deserves to know his birth mother. Plus, finding out that Sheila was the one that pushed Jack Finnegan (Ted King) to confess plays into this storyline.

So, Steffy will find herself stunned by Taylor’s suggestion that Sheila be invited over for Christmas. Steffy might finally give in when Finn applies even more pressure.

Looking at the television listings at On TV Tonight, Sheila gets a Christmas miracle during the week of December 20. Despite the odds, Steffy actually agrees to allow Sheila to celebrate the holidays with her family. What is interesting is that Taylor promised that Sheila would never hurt Steffy again. So, what exactly does Sheila say that convinces Taylor that she is no longer a threat?

Will this day go as Sheila hopes or could Steffy be trying to prove a point? Will Steffy push Sheila’s buttons until she explodes? That’s always possible, but maybe this could be a new beginning for Sheila. That’s the angle actress Kimberlin Brown has been teasing for months.

What do you expect to happen when Sheila celebrates Christmas with Finn, Steffy, Taylor and the children? We will have to keep watching the CBS soap to find out.