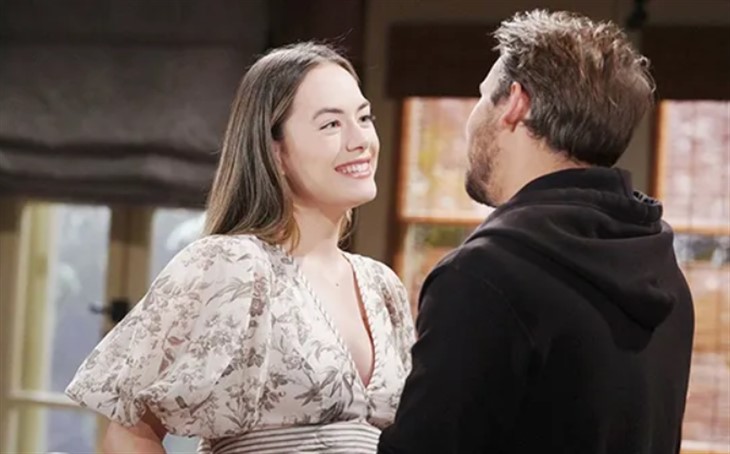 The Bold and the Beautiful spoilers indicate that another love quadrangle may be on the way.  For the past decade, B&B fans have watched the never-ending triangle with Hope Logan (Annika Noelle), Liam Spencer (Scott Clifton), and Steffy Forrester (Jacqueline MacInnes Wood).

With Hope and Liam together, and Steffy married to Dr. John “Finn” Finnegan (Tanner Novlan), everyone believes the love triangle is finished.  However, it might not be over. Based on recent The Bold and the Beautiful scenes, speculation is a quadrangle is forming with these four characters.

As seen in the latest B&B scenes, Hope and Finn shared a heart-to-heart talk. The two spent time together while Liam and Steffy were away with Kelly Spencer (Avalon and Colette Gray). During Finn and Hope’s chat, the doctor opened up about the drama in his home life.

The Bold and the Beautiful spoilers tease Finn and Steffy’s marriage has been rocked since Sheila Carter’s (Kimberlin Brown) arrival. Upon discovering Sheila’s his mom, Finn wants to know more about her. He’s already learned about Sheila’s dangerous past from Steffy and the rest of the Forresters. He’s also been warned to stay away from Sheila.

Needing someone to confide in, Finn choose Hope. She was understanding of Finn’s feelings about being stuck between his mother and his wife. Hope offered her advice and then hugged Finn.  Finn and Hope’s interaction has fans wondering if the show’s testing a possible romance between the two.

B&B Spoilers – Both Couples Will Be Experiencing Marital Issues

With Sheila still in town, she’s going to continue being a source of contention between Steffy and Finn. The couple’s had lots of arguments and Steffy even threw Finn out of the house. Although they made up, it’s only a matter of time before they’re arguing again.

Steffy and Finn aren’t the only B&B couple who’ll be facing marital issues. According to upcoming spoilers, Hope and Liam’s family will be rocked by the return of a character.

With both couples experiencing problems, odds are there’s going to be a break up or two coming. As fans know with Steffy and Liam single, this will set the stage for a Steam reunion.

In the past whenever Liam has a problem he goes running to Steffy. Their last interaction led to a drunken one-night stand, and almost the end of their relationships. This time they might not be so lucky in repairing their relationships with Hope and Finn.  Steffy and Liam will be relying on each other during their latest situation. Before long, old feelings will reawakens and Liam will go back to his waffling.

B&B can’t resist revisiting their famous triangle. With Finn added into the picture, this storyline will be more interesting.

As Liam and Steffy head toward reconciliation, Hope and Finn will be left out in the cold. But not for long. With theirs exes hooking up again, Finn and Hope will find comfort with each other. Of course Steffy and Liam won’t be happy, and this will undoubtedly create drama with the foursome.