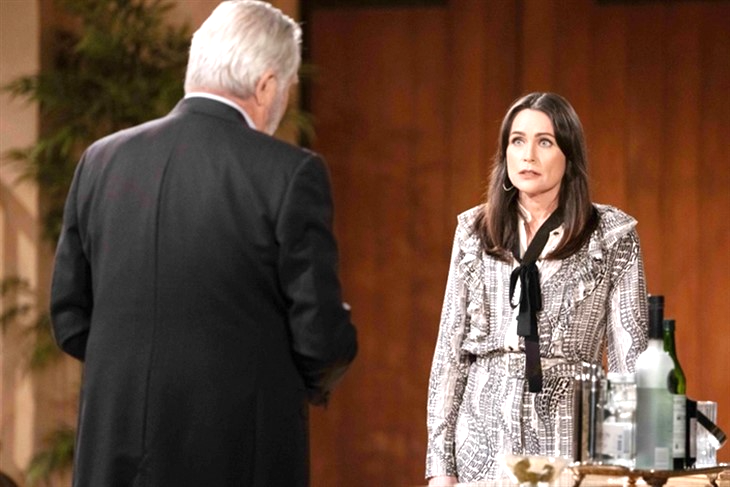 The Bold and the Beautiful spoilers document that Quinn Fuller (Rena Sofer) did not expect Eric Forrester (John McCook) to totally reverse course. But he did because that’s what happens in daytime.

There may have been some audience members who predicted that Eric would decide he didn’t want to divorce his wife. His decision to stop Quinn from signing the papers and then tearing his own copy is a potential storyline game-changer.

But, as The Bold and the Beautiful fans know, Quinn has a new man in her life. She’s genuinely come to care about Carter Walton (Lawrence Saint-Victor). That, combined with her assessment of his ability to be a good financial provider is part of Quinn’s unexpected decision-making process.

What incentive would Carter have to remain silent about Quarter’s existence if Sofer’s character reconciles with Eric?

Carter would be heartbroken. He might also feel that Zoe Buckingham’s (Kiara Barnes) betrayal was happening all over again.

Just as Carter was convinced that Zoe was going to be his great love, so too has he convinced himself that Quinn is that woman. It was understandable for him to feel that way based on all that’s happened between them and what Quinn has continued to say about Queric being over.

Eric hasn’t been privy to the light of the truth. Quinn never stopped seeing Carter after he told her that Eric ordered him not too.

It was revealing when Ridge Forrester (Thorsten Kaye) merely mentioned Carter’s name, which was just prior to when Quinn arrived. In between both conversations Eric looked longingly at Stephanie Forrester’s (Susan Flannery) portrait. He was obviously hoping that doing so would provide him with some form of wisdom.

Quinn’s later response to Stephanie’s return to the mansion’s living room wasn’t followed by what would have been expected comments. Normally Quinn would have made mention of Eric having given her portrait to Carter and that she either received it or didn’t.

But Eric wasn’t thinking on that level. Instead he was preparing to share his realization with Quinn.

Eric was shaken by Sheila Carter’s (Kimberlin Brown) shocking return. While he didn’t become outraged, Eric did need to step away from the emotional situation she triggered with her genetic bomb drop.

Just as John Finn Finnegan’s (Tanner Novlan) mind was scattered by the events that took place at the Sinn wedding reception, Eric was impacted as well. Eric’s reaction provoked his choice to reclaim a perceived idyllic past.

Quinn is baffled that Eric actually took blame for Quinn seeking consolation. That followed her genuine statements about not intending to hurt him and Eric being the person who changed her life. But she changed his as well.