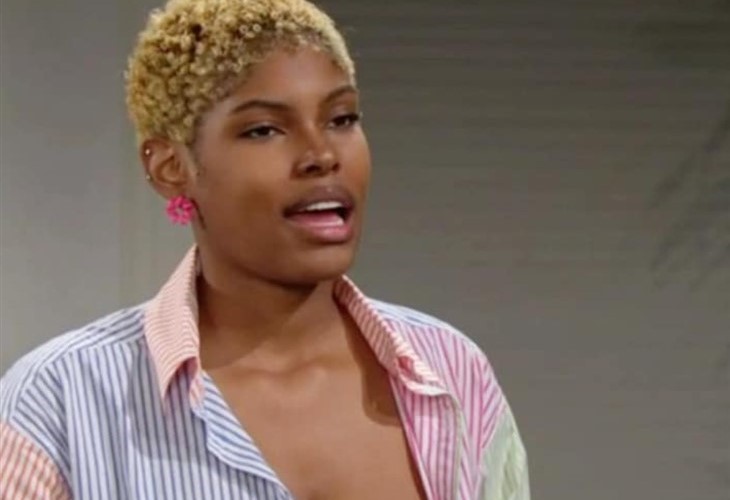 The Bold and the Beautiful (B&B) spoilers for Thursday, September 16, 2021, reveal in Los Angeles Steffy and Finn trying to rekindle that flame before it flames out.

The Bold And The Beautiful Spoilers – Paris Buckingham Is A Problem

Steffy (Jacqueline MacInnes Wood) and Finn (Tanner Novlan) certainly haven’t had an easy start to their marriage. Right after the ceremony, crazy Sheila Carter (Kimberlin Brown_ showed up and announced that she is Finn’s biological mother, throwing Steffy into a tailspin. This woman who stole her mother from her when she was a child is now her mother-in-law. It’s been too much already and she doesn’t even notice she has another problem on her hands.

Now that Steffy thinks she’s rid of Sheila, her houseguest may also cause some trouble. Paris Buckingham (Diamond White) clearly has a crush on Finn and she is always there to be a listening ear when he needs it. He knows all about the fact that Finn wants to get to know Sheila, but Steffy does not know. Things turn even more awkward on Wednesday when Paris walks in on a passionate moment between the newlyweds.

Brooke (Katherine Kelly Lang) and Ridge Forrester (Thorsten Kaye) still can’t understand why Eric (John McCook) took Quinn (Rena Sofer) back and can so easily forgive her for sleeping with Carter Walton (Lawrence Saint-Victor). They certainly don’t forgive Quinn, but Carter? Well, it couldn’t have been his fault so they are cool with him, but not that Quinn. She’s always been someone they never trusted and nothing has changed.

To that end, they pester Eric on Thursday to get him to admit what’s been going on. It’s all so confusing and clearly their business so they won’t let up. Eric didn’t have any problems telling Carter about his erectile dysfunction problems, asking him to oddly service Quinn. Will he want to tell his son and daughter-in-law, with his daughter-in-law also being his ex-wife and mother to two of his children? Things are awkward already, so why not make it a little more awkward, right? If Eric does tell the truth, how will Ridge and Brooke react to the news? Stay tuned to The Bold and the Beautiful weekdays to see how these stories play out.