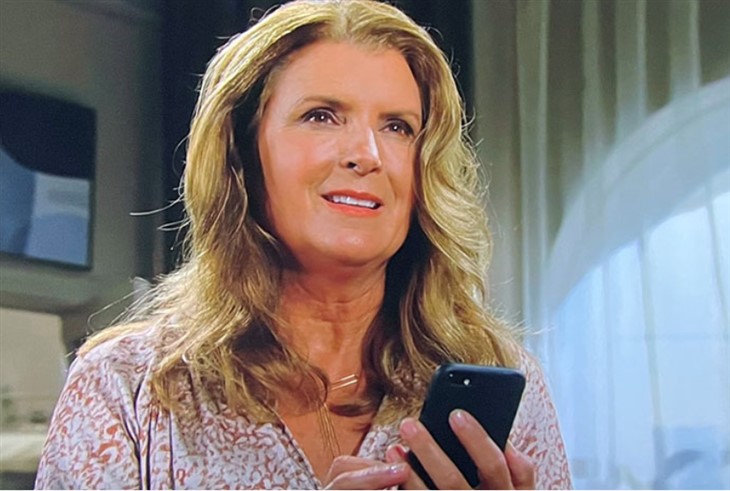 The Bold and the Beautiful spoilers for the next two weeks reveal that John “Finn” Finnegan (Tanner Novlan) gets played by more than one person. Steffy Forrester (Jacqueline MacInnes Wood) wants a separation and refuses to sign the marriage certificate. Meanwhile, Sheila Carter (Kimberlin Brown) plots revenge and Paris Buckingham (Diamond White) crosses the line.

The Bold And The Beautiful Spoilers – Steffy Forrester’s Separation

B&B spoilers reveal that during the week of August 30, Steffy will ask Finn to move out of the main house. Finn takes up temporary residence in the guest house while Steffy tries to protect Hayes Forrester Finnegan. Finn and Jack Finnegan’s (Ted King) deception put everyone in danger, including Steffy’s innocent baby boy.

Not only will Steffy and Finn separate, but the marriage license hasn’t been signed. So, Steffy will need to figure out whether to make the marriage legal or walk away from Finn. She will confide in Ridge Forrester (Thorsten Kaye), who will explode at the thought of Sheila holding Hayes.

Over in Sheila’s corner, she will realize just how much Steffy is like Stephanie Forrester (formerly Susan Flannery). Sheila’s fury will continue to escalate to dangerous levels.

While Finn thinks about how things spiraled so out of control, he will get some company. Paris decides to offer her friendship and support to Finn. Paris might not have any ulterior motives, but soap fans know just how easily those lines can be blurred. Zende Forrester (Delon de Metz) won’t be happy with Paris taking Finn’s side. Meanwhile, Paris will think that everyone is being way too harsh on Finn. It sounds like “SINN” might not be the only relationship in jeopardy because of Sheila.

The Bold And The Beautiful Spoilers – Reunions, Reflections And Rants

The Bold and the Beautiful spoilers reveal that Quinn Forrester (Rena Sofer) wants to stay loyal to her husband. She feels terrible that the reason Eric Forrester (John McCook) was rejecting her was due to a medical problem. However, can Quinn really live that way? While Quinn is contemplating this, Carter Walton (Lawrence Saint-Victor) will reflect on their passion. He would like it back but thinks it isn’t an option anymore.

As for Ridge and Brooke Logan Forrester (Katherine Kelly Lang), they will fume over “Queric.” Ridge and Brooke will likely attempt to reason with Eric again, but get a brutal tongue-lashing. Eric resents anyone telling him how to live his life or who to be with, including “Bridge.”

During the week of September 6, Sheila will get closer to Finn. However, Steffy hasn’t given up on him yet. Steffy will jump into action and try to make Finn see the truth about his birth mother. As Finn continues to be torn, Sheila will try to get back the upper hand. She might even consider just getting rid of Steffy completely, so this is getting very dangerous.

Meanwhile, Jack will be fuming over Sheila’s blackmail and demands. It sounds like the only way to save Finn is if Jack takes action to eliminate the threat. So, we will have to see if Jack gets redemption or if Sheila gets handled by someone else.

Why General Hospital Was Right To Retire Jason And Sam

Y&R Spoilers: Phyllis And Sally Cause A Fuss In Newman Media Party