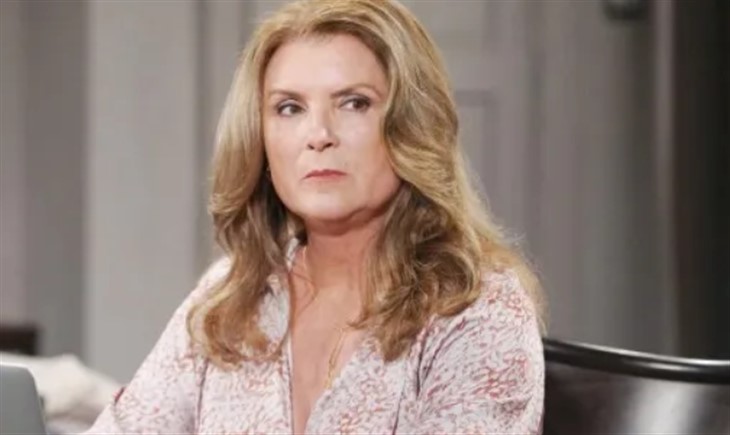 The Bold and the Beautiful (B&B) spoilers for Friday, November 12, 2021, reveal Sheila reveling in the fact that she has something to hold over Jack Finnegan’s head, but how long can it last?

While Sheila Carter (Kimberlin Brown) is not thrilled that Deacon Sharpe (Sean Kanan) went rogue and decided to branch out on his own in his quest to have Hope Logan Spencer (Annika Noelle) back in his life, she is thrilled when Jack (Ted King) gives her a call and invites her to lunch. He must want to talk about something juicy and she can’t wait to hear what he has to say. Will he be more cooperative with her now and help her be a part of Finn (Tanner Novlan) and Hayes’ lives?

Well, she might not get a chance to find out when Finn shows up and Jack makes a quick getaway and hides. He certainly doesn’t want Finn to see him with this woman and wonder why he’d ever go near her.

Chances are Finn will see his father and demand to know what’s going on. Will it be up to Sheila to just reveal the truth and let the chips fall where they may? Finn thinks Jack is the man who adopted him and not actually his biological father and it looks like he’s about to learn the whole truth.

Liam Spencer (Scott Clifton) is still shocked that Hope wants her father to be a part of her life whether Liam wants her to or not. After all, she is a grown woman and her own person and can make her own decisions. She doesn’t have to listen to what her husband tells her to do.

Liam is not quite sure what to make of all this, especially after that pact he made with Ridge Forrester (Thorsten Kaye) to ensure Deacon stays far away from their family. He could respect his wife’s wishes and tell Ridge to back off, but that would be out of character for Liam, a man who makes assumptions, flies off the handle too easily, and then begs for forgiveness.

Hope might have to see her father behind her husband’s back and at this point, she seems to have no problem with taking a stand for herself and doing just that. Stay tuned to The Bold and the Beautiful weekdays to see how this story plays out.