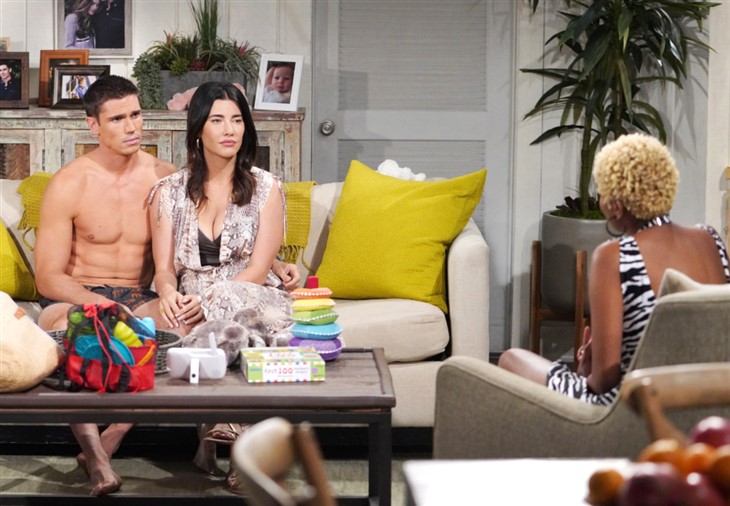 The Finnigans and their new houseguest are causing quite a stir because they have been over the top with pleasantries towards one another. Many B&B viewers are wondering why this trio is resorting to so much flattery and wish it would stop.

Shortly after Paris Buckingham (Diamond White) moved in with John Finnigan (Tanner Novlin) and Steffy Forrester (Jacqueline Macinnes Wood) she was accused by Zende Forrester ( Delon de Metz) of hero worship. Zende seemed puzzled by the way his girlfriend was gushing over the newlyweds complimenting them at every turn and saying how amazing they are.

Spoilers are now addressing this issue that has been annoying B&B viewers for quite some time. On social media a number of fans are saying they wonder why the writers are going in this direction and that the excessive flattery needs to stop. Paris recently told Sinn how much she admired them and the Finnegans have been pouring adoration on each other.

The Bold And The Beautiful Spoilers- The Adoration Is Spread Around

Steffy and Finn never miss a chance to tell one another what a wonderful spouse and amazing parent the other is. Steffy and Paris both have told John Finnigan that he is a great doctor although he is never in the hospital. Finn and Steffy are constantly praising Paris and saying how amazing she is. They tell her often how much the children love her and what a joy she is to have around.

B&B viewers also overwhelmingly don’t like the fact that Paris recently had a steamy daydream about Finn. Spoilers acknowledge that there was heat between the duo but no one wants to see them break Steffy’s heart.

General Hospital (GH) Spoilers: Portia And Curtis Reconnect – Will He Break Things Off?