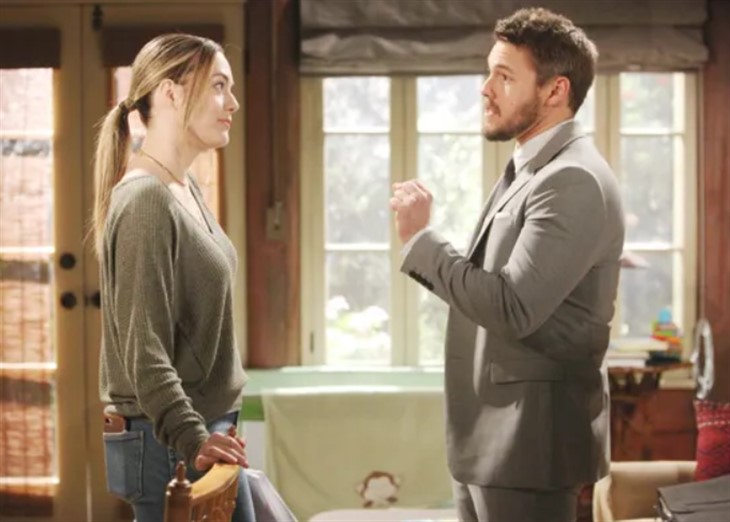 The Bold and the Beautiful (B&B) spoilers for Thursday, November 11, 2021, reveal another day of Hope Logan doing as she pleases as she finally realizes she’s a grown woman and mother of two.

Despite being an adult and mother herself, Hope Logan Spencer (Annika Noelle) often allows herself to be babied by her mother and husband. Liam Spencer (Scott Clifton) may screw up over and over again, but when she takes him back, he thinks he’s in charge. Hope already told Brooke (Katherine Kelly Lang) and Ridge Forrester (Thorsten Kaye) that she is going to get to know Deacon Sharpe (Sean Kanan( whether they like it or not. (After all, he is her father). Now, it’s time to tell Liam.

And Liam is not happy when he hears that Hope doesn’t want to obey him, completely forgetting that it’s 2021 and wives do not obey their husbands anymore. Hope doesn’t care if Liam is happy or not and is going to do what he wants. That means Liam has to call Ridge and get this situation under control now. After all, he and Ridge made a pact that they will keep Deacon (and Sheila) away from their family members at all costs.

Perhaps Liam shouldn’t worry because Ridge is apparently already on it. He hires Justin Barber (Aaron D. Spears) again, but this time he doesn’t want him digging up dirt on Quinn Fuller (Rena Sofer). He needs him to find out what Sheila Carter (Kimberlin Brown) and Deacon are really up to and who better to dig up all the dirt than Justin?.

It’s strange seeing Justin as Ridge’s right-hand man rather than Dollar Bill Spencer. It’s quite a case of role reversal. Ridge doesn’t even seem to think it’s a problem that Justin went nuts, betrayed Bill, and locked Thomas Forrester (Matthew Atkinson) in a cage. Usually, people don’t turn to the men who assault and kidnap their children, but this is Ridge we are talking about here and all must adhere to his rules. Stay tuned to The Bold and the Beautiful weekdays to see how this story plays out.