The Bold And The Beautiful Spoilers: Steffy Forrester And Liam Spencer Destined To Be Together? 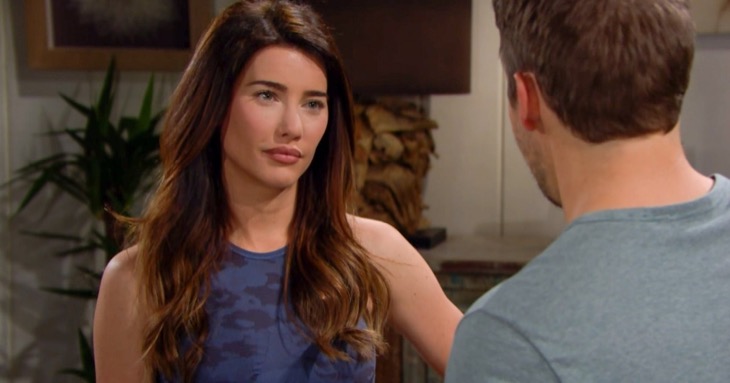 The Bold and The Beautiful spoilers tease that Steffy Forrester (Jacqueline MacInnes Wood) and Liam Spencer (Scott Clifton) are conflicted about their next move!

The Bold And The Beautiful Spoilers – Steffy Forrester And Liam  Spencer Made A Big, Big Mistake

Viewers of The Bold and The Beautiful will recall that last week, Steffy and Liam made a big, big, mistake! Liam reacted instead of acting, like he usually does, at the sight of what he thought was his wife Hope Logan Spencer (Annika Noelle) kissing a shirtless Thomas Forrester (Matthew Atkinson) in his apartment. It of course, was NOT Hope, but the mannequin, and instead of Hope destroying their marriage, as he had accused her of, Liam more than likely has destroyed his! He went, as usual, straight to Steffy to cry on her shoulder, but they did more than cry. They got drunk and fell into bed together!

Now, in the midst of Thomas fighting for his life, and NOT having gone back to his old obsessive behavior, Liam feels like a fool, and Steffy worries about the outcome of their forbidden night of passion. More than likely, because she has talked about her boyfriend, Dr. John “Finn” Finnegan (Tanner Novlan) spending the night a couple of times a week, she is on birth control, or one of them is taking precautions.

But if it has been Finn who has been taking the precautions and not Steffy, The Bold and the Beautiful spoilers hint she could wind up pregnant! The CBS soap opera actress is pregnant in real life and there is a distinct possibility that it may be written into the show this time around! Especially if none of them have been taking precautions! One would think a doctor would know how babies are made, but this is a soap opera!

In spite of his foolish assumptions that have possibly resulted in him losing his wife, Liam still gravitates to Steffy for comfort. The waffling between Steffy and Hope has been an issue with Hope for a very long time, and Hope had not that long ago decided to trust him. She wasn’t happy when she found out Liam and Steffy had kissed last spring, but then it came out that Thomas had manipulated all that to come between Liam and herself.

The Bold and the Beautiful Spoilers: Annika Noelle Talks The 'Hope' Doll And How The B&B Team Worked Their Magic #BB #BoldAndTheBeautiful https://t.co/orXdI9OI2G

Thomas was royally served his comeuppance when Liam, Hope, Steffy, Zoe Buckingham (Kiara Barnes), and even his little boy Douglas Forrester (Henry Joseph Samiri) were in on the plot! They set up an elaborate wedding in the Forrester mansion with all Thomas’ family in attendance, and exposed him and his manipulations! He fell for the set-up, and just went out the door like a dog with his tail tucked between his legs, not to be heard again from in months! He returned a much more stable and much less manipulative Thomas until the brain trauma emerged which made him hallucinate and lose touch with reality.

The Bold and the Beautiful spoilers show Steffy is in a tough spot. She knows Liam will waffle back to her again and he is still just too close. It’s a fine line to walk since she doesn’t want to ruin her relationship with Finn nor with the father of her child. But she knows, in spite of Liam feeling he needs her and his being conflicted as to whether he wants to waffle on back to her, and her own conflicts, she needs to make the boundaries clear. Liam may react in such a way that she could lose him, and her brother to death at the same time. Both Liam and Steffy must proceed with caution with each other and their other loved ones!

Are 90 Day Fiancé Rebecca And Zied Still Together?